First huge thanks to the lovely Lina for nominating me for the Amazing Blogger Award...the recipient of which has to detail seven weird things about themselves...it's taken me a while to get round to doing this as I couldn't actually think of any, so I asked Ian to come up with some instead that I could then elaborate on...the first 6 are his...the last is just my own odd thought that I thought I'd share with you, failing Ian being able to come up with a seventh weird thing about me ("You're just not that weird"...oh the relief!). But really weirdness is so subjective...Ian thinks these things are weird about me, but maybe you all do them too! (Do let me know!)

1. I am terrified of driving, but especially going on motorways. I force myself to drive, and so have got substantially more confident in the last year...but I secretly wish that we could go back to using horses & carriage...or just all agree to use bicycles...because I’m even too scared of using those when I have to share the road with a car. My two most feared vehicles are any American looking lorry (after watching Dual) and any lorry bearing an alcoholic drinks logo on the side...I have a completely unfounded and irrational fear that the driver is more likely to be drunk. Hmmm. 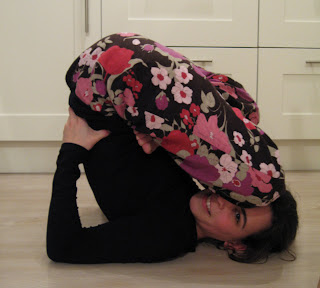 2. I can fold myself in half (or at least I used to be able to do it completely pre-children...it's more that I can fold myself into some sort of triangle now!). This involves getting into the Lotus position (much better than just sitting cross-legged as it secures your legs more tightly into a smaller space) and then rolling backwards so that your knees are on the floor to either side of your head (this is the bit that I now seem to be less capable of doing!). Years ago after three months in a job that I loved, my boss said to me as an opening line in my appraisal: ‘Well, Flossie, why should we keep you then?’. A quick ‘folding demonstration’ on the boardroom floor and the job was mine to keep....even though my job description required no gymnastic ability whatsoever. (Other than my two bosses at that job and my sister and mother still, no one ever actually calls me Flossie...and I’m pleased about that.)

3. When it comes to playing friendly sport with Ian I have inherited my father’s awful hyper-competitive streak. I would risk knocking small children’s heads off in my desire to hoof the ball past Ian when we play ‘penalties’ in the back garden during the summer. In every other way I am the least competitive person I know.

4. I can turn myself off when I’m being tickled. A moment or two doing what feels like distancing my mind from my body and I am no longer ticklish. Ian thinks this is the kind of quality that one might share with a psychopath. Oh dear.

5. I have been vegetarian since I was four years old. Near the bus shelter where my mother and I used to wait for the bus to take us into town there was an abattoir and to pass the time I would watch the comings and goings of the snorting, clucking and mooing vehicles that arrived...she made the big mistake of telling me what the snorts were and what their final destination was. Within a year the rest of our family stopped eating meat too, which in 1982 was something of a rarity (particularly when our extended family were farmers). Ian became vegetarian within months of us meeting...which I always find really embarrassing as I would never try to convert anyone and feel incredibly uncomfortable if anyone tries to have ‘the vegetarian debate’ with me. I shy away from having conflicting views with others as it makes me feel anxious.

6. I’m incredibly inpatient when it comes to completing any sort of housey project and tiredness, or lack of materials, is not an acceptable excuse for leaving a task half-finished to be returned to at a later date – unfortunately for Ian he doesn’t share my need to get things done RIGHT NOW. Last year we decided to lower the level of one of the long flower beds in the front garden – this involved shovelling the most incredible amount of earth onto the driveway and then planting all the new plants that I’d chosen and laying a couple of old stepping stones so that the children could hop through the flower bed easily. At 10.30 at night we were still out there, in complete darkness trying to move all the earth round to the back of the house, plant the plants with some vague nod to a colour scheme and do it all so quietly that the neighbours wouldn’t be disturbed by our late-night horticulture. At 11pm when we finally realised that the wheelie bin that we’d just had the brainwave of putting much of the earth into said: ‘no soil’ on the lid...well, we both sat down in the flowerbed in absolute hysterics, suddenly very aware that this nocturnal gardening was not necessarily normal...it suddenly felt as though every curtain in the street may have been twitching at the view of our complete ridiculousness.

7. When I was younger I was in my parent’s house alone making my tea. I put a potato onto the work surface ready to scrub and it rolled off and then bounced onto the floor in such a peculiarly jaunty way that it made me laugh out loud....I then realised that my own laughter ringing out into a space where I am completely alone feels like the strangest thing on earth. It’s different if it’s prompted by reading a book, listening to the radio or remembering something funny that happened....but creating your own incidental comedy and then laughing at it...that just feels weird to me.

Anyway, weirdnesses revealed I do hope that you still want to be my friend! I think that I am now to nominate others for this award (although I've no idea who has had it or not, so I'll just do it on the basis of who I think are wonderful and lovely bloggers...but will limit myself to five, otherwise I could just go on all day. If they care to participate, the Amazing Blogger award will be handed over to:

Helen from Angharad, Jo from Today we are..., Ginny from The Flour Loft, Kelly from Notes From My Nest and Alice from The Magpie Files.