To sleeve or not to sleeve... 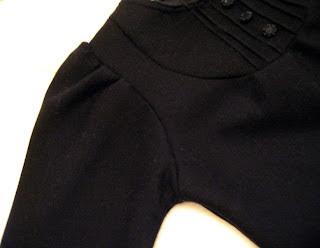 Above is a picture of the black dress that I showed you my plans for last week. I so enjoyed making the bib - I love the bits of a project that are detailed and will be visible in the end result, I also liked putting in the concealed zip, because it was easier than I thought it would be and involved using my new 'concealed zip foot' (have you got one of these? I think it may be a must have item, so very satisfying and more importantly, fool-proof, to use), and I also enjoyed putting into practice the 'ease-stitching' technique to insert the sleeve that I'd picked up from Heather Bailey's Bitty Booties pattern (yes, there is thankfully at least one pattern out there that is vaguely comprehensible to me!). I don't know whether this is quite the way that one should put in a sleeve, but I'd thought and thought about how it might be done and this was the only way that I could come up with that might give me some of the puffiness that I was after. Things that I did not enjoy were working with that vile fabric, which becomes a nightmare when a seam ripper is needed - the stitches just sink into the weave of the fabric and I came so close to creating a million little holes all over it...or just throwing it in the bin as it was so frustrating trying to see to unpick the countless amount of faulty stitches that I made along the way. 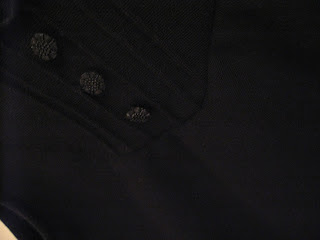 Dinosaur-boy helped me choose the buttons for this dress and I love them - they are more perfect than what I had in my mind when we set off to the shop, don't you love it when that happens? Anyway, you'll notice that something strange has happened to the puffy sleeves in this last photo...well, they were just a little too puffy was Ian's opinion and he thought a pinafore dress would be more simple (he just hasn't watched enough period dramas to get quite where I was coming from on that one...but actually, maybe they were a little more puffy than even I'd intended...I could have tried to take them out and reinstall them with less puff, but while unpicking them I made a great big hole in one of the sleeves and so I thought: 'yes, how right he is! It will be a pinafore dress!). 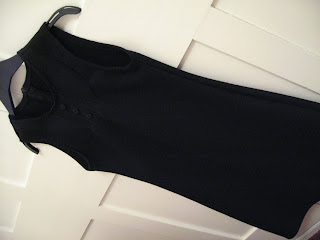 How's the fit? Well exactly as I want it everywhere, apart from being a smidgen tighter than I'd want it across the bust. Grrr. Lady V was no help at all...while one of my drapier dresses was fine on her I quickly realised that there are fundamental differences between us...namely she has an extra 3 inches on the bust (there's a theme here...too big and too small all in one post!) which I'd blithely thought wouldn't make that much of a difference...it does...and such deep shoulders that I can't actually get any of my non-drapey dresses onto her. Such a disappointment. 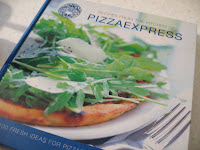 We had a lovely Sunday today. I finally got round to writing Christmas thank you cards with the children, we played some of the games on this website (obvious, but I'd never noticed there was a next step up from Cbeebies games...it's fantastically educational and is designed to be in line with what your child is being taught in school....perhaps everyone else already knew about this though?), and Ian pretended that he was running an Italian restaurant and made pizzas and doughballs for us all from the Pizza Express cookbook. The children loved it and Dinosaur-boy went all smiley and giggly just like he does when they pinch his cheeks in a real Italian restaurant. If only you could capture and blog smells - I love the smell of the yeast fermenting under a tea towel. Here's one made up just before it went into the oven. 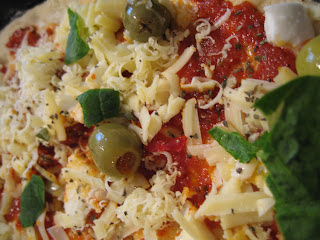 The children were allowed into his kitchen to help...yes, that's a small blurry peek of some new work surface there...but unfortunately no pictures until next week when the rest of the floor is going to be fitted...and by then we may also have a large hole in our wall. Unfortunately the glass splash-back company have sent us the wrong colour splash-back...and I didn't realise this until it was up and siliconed to the wall...and it finally dawned on me that there wasn't a plastic film over it...that really was the actual colour of it...and it's awful!