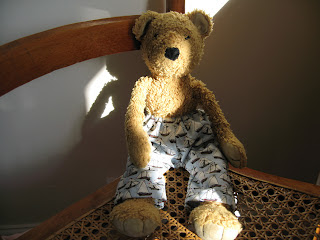 A couple of posts ago I wrote about Zebra-girl making a purse with me, and about Dinosaur-boy's subsequent upset when I told him that he was still a little too small for using the sewing machine (he's 3). Eventually he resolved the disappointment for himself by requesting that I make his bear a pair of pajamas in a fabric picked out by him. No hours of pondering for Dinosaur, he went straight for this fabric with a boat print. Even though Dinosaur-boy seemed happy with this arrangement though, I felt slightly guilty inside. I felt like I'd stamped on his enthusiasm for doing something. So one morning after we'd dropped Zebra-girl at school I asked him if he would like to help me make the pajamas after all. He found the marking out bit a little dull (and I found it quite pressured as I was so worried I'd lose his interest), but he loitered fairly happily as he was so excited about the prospect of using the machine. We rested the pedal on the little stool that he usually stands on to reach the taps at the bathroom sink. I so wish I could have taken a photograph of his small foot on the pedal...but I was having to work so quickly, and full of such anxiety that he might sew his little fingers together, that there was no time for shenanigans with the camera! So I steered the fabric through the machine and he tried out various speeds of machining and was actually fairly good at stopping almost exactly where I asked him to, and by the third seam he was watching for the lines on the fabric and knowing where he was meant to be stopping. He loved using the reverse stitch and, like Zebra-girl, seemed to get untold amounts of enjoyment from the act of returning the pins to the pin cushion. I ended up finishing the waistband on my own, because very suddenly he jumped off the chair and said that he was going off to play with his trains. Mmm. 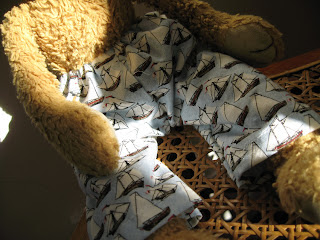 One of the loveliest things about Dinosaurs-boy's bear is that he is very loose-limbed and can be carried around easily dangling by an arm or a leg. He joins us for most meals and is even dragged down the ladder of the bed in a sleepy hand as Dinosaur-boy makes half-awake night-time trips to the toilet. So I should have known that in reality pajamas may alter the 'feel' of his bear for him. When the trousers were finished we put them on him and Dinosaur-boy gave his bear a big squeeze and almost instantly looked appalled by the less malleable form that he held in his arms. No! Get them off! Bear doesn't like Pajamas! he wailed anxiously. A naked bear and his owner went back to playing with the train set as I went off to tidy up the mess created by the sewing session. As I was gathering all the bits of thread from the floor they appeared in the room: And don't make bear a pajama top, because he doesn't want one of those either, he said. It has pained me to leave a project half-finished, but making the top would be a rather pointless exercise, so I have decided to leave it there. The Pajamas now live in Dinosaur's bed because apparently 'bear' likes using them as a hanky to wipe his nose with during the night! Eugh!

Bear was happy to model the PJs during nursery hours...his owner was less than happy on his return to find that his mummy had forgotten to remove the offending items from the bear's body after she'd finished her photo shoot though!

Thank you so much to everyone who has wished me better! I am feeling rather guilty now at the amount of (lovely!) well-wishing I have received...almost as though I have created some equivalent of a 'man-cold' for myself!

I have been really slow in replying to emails over the last couple of days - sorry! Normal correspondence will be resumed just as soon as I've stopped dabbing at my nose with Bear's PJs (that was a joke by the way). x
Email Post