A zebra at the machine! 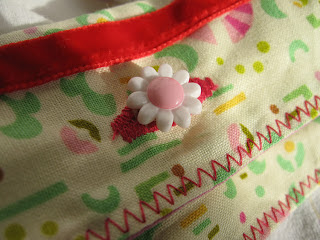 As promised, on Sunday it was Zebra-girl's day for some stitchery. She woke early and asked every five minutes when we could get started, but allowed me ten more minutes in bed before striking a deal that we would pick the fabric out before breakfast and sew after breakfast. We drew a picture of what we wanted to make in my sketch pad and then she spent nearly half an hour picking out her fabrics...she knew straight away that she wanted this Heather Bailey fabric shown above, but then took a long time carefully yanking fabrics out to put next to it to decide what would make for a good complimentary lining.

All the time she was making her decisions she very sweetly had to put me back in my place...when I suggested plain pinks or greens to line it with she pretended to consider it for a moment and then would say a little more firmly: No, Mummy, I really like patterns. Again with the thread, when I presented an apple green or a baby pink reel: No Mummy, I like really bright threads. She is such fun to choose these things with though, and every time we sew together I learn a little more that this isn't about me...it's about sitting back and letting her choose her own things for her own projects. So no, I wouldn't have chosen a strip of red velvet to go across the top at that point, but how delighted I was by it when she'd finished. 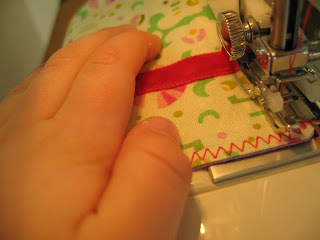 So with fuchsia pink thread she sewed her purse together. She was less confident with feeding the material through the machine than when she'd made her bags at Christmas, so I ended up helping a bit more with that this time. 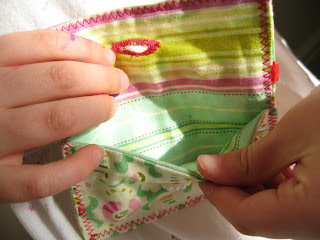 Some Heather Bailey stripe on the inside and a carefully selected button to fasten it with. 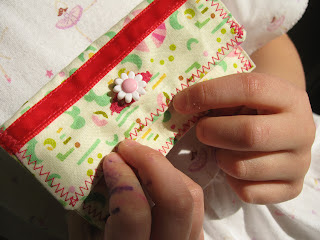 I love that her fingers are covered in felt-tip in this photo...it is so very characteristic of my little Zebra. I'm absolutely convinced that we could never buy her another toy again and as long as she had some paper, a dozen rolls of cellotape and some felt tips she would be completely happy.

She spent a long time putting train tickets, beads, and buttons in and out of her purse, with the same curious sense of experimentation as Eeyore once displayed with his jar and balloon...but actually it's for her handkerchief.

Dinosaur-boy, who had been playing happily downstairs with Ian, came up just as we were finishing. I want to sew, he had said with his bottom lip already starting to wobble, before dissolving into tears and claiming that I never made things with him or for him! We went into his bedroom and looked at the things I had made to decorate it with, which cheered him up a little, and as he we were wiping his tears away his expression suddenly changed to that of one having a Eureka! moment and he said with the sweetest little smile: I think, Mummy, that bear would really like you to make him some pyjamas. So that will be my next project and Dinosaur-boy has already picked out the fabric.
Email Post