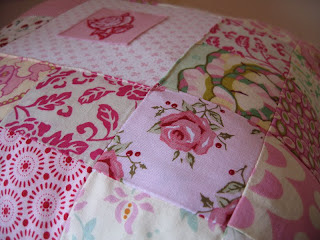 By the end of last week I was feeling run-down and tired. When I drop Dinosaur-boy off at nursery I usually race home, turn on my laptop, open my email, check my phone messages, put on some music from my itunes folder, thread up my machine and start some sewing...but suddenly the idea of all this felt too much like multi-tasking, so I chose instead to leave my laptop inside my desk and enjoy some fabric-filled silence...and how very restorative it was! For I realised that computers whirr....LOUDLY! This is what I was halfway through making by lunchtime when I left to collect the little Dinosaur: a cushion for Zebra-girl's bed. My last attempt at patchworking revolved around a pre-cut pack of peach hexagons bought from Laura Ashley in the late 1980s, aged 11 (when peach was a hugely fashionable colour). I remember having a very frustrating time with it and being quite devastated by my inability to align the hexagons nicely, eventually consigning them to the bin. But Zebra-girl has been quite desperate for a cushion on her bed and my instinct was to try and squeeze a great many different fabrics into its creation, so that she might have the fun of gathering favourites, counting flowers and tracing shapes as she goes off to sleep. I love the idea that these materials that surround her in childhood, might later jog her memory as she sees a similar print on a dress or a shirt in a shop and that it will perhaps transport her back to evenings spent staring at the things in her room as she waited for sleep to come (for she does a lot of this type of waiting). So this cushion was to be my first grown-up attempt at patchwork....and I loved it. Although, I have decided that squares are probably an easier starting point than hexagons. I wanted to applique a rose in the centre, as Zebra-girl has been coveting this detail on the teabag holder that I made a couple of weeks ago. 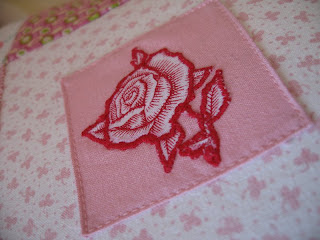 When I collected her from school on Friday and told her what I was in the midst of making she was hugely (to a most unexpected degree!) excited and implored me to carry on immediately once we got home. Dinosaur-boy wanted her to play with him, but she insisted on watching over me, asking questions and encouraging me to work faster so that it might be ready for bedtime. 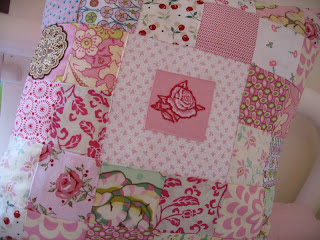 It was finally delivered, to gasps of delight (what a very gratifying recipient she is!) 20 minutes after she'd gone to bed. It appears to be a cushion of the sleep-inducing variety - horay! 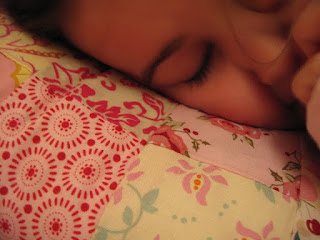 Patchworking aside, as I'd been saying earlier in this post, by the end of last week I was just feeling exhausted and...well....haggered. Recently every time I unexpectedly caught sight of myself in a mirror I was shocked by how old and witchy I looked. On Thursday morning I measured my hair. It was 21 inches long. It was an excellent canopy to hide behind, I could tie it in a bow, cover my chest and part of my stomach up with it, drape it over my lips in a handlebar mustache several times over (if I felt inclined to do so) and lots of other interesting things...but ultimately I felt like it was dragging me down. By Thursday lunchtime my hair measured a mere 12 inches: a length less handy for tricks...less appealing to my children, who requested that I 'stick it back on'...less predictably responsive to being waved at carelessly with a hairdryer whilst reading a book...but I am feeling so much better for being in the company of hair that bounces like an excited puppy around my jaw. 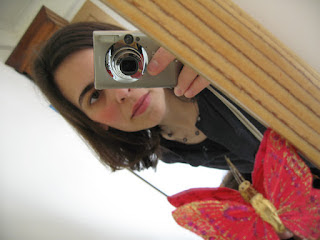 (NB: Photo taken from a very odd angle due to the presence of a small Zebra working at my desk beneath the mirror).
Email Post