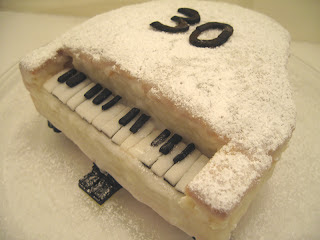 Mr Teacakes has had rather a rush on birthday cakes in the last couple of weeks. Last night we went to a party at a lovely country house that a friend had hired out to celebrate his 30th birthday. Ian and several others were to provide the musical entertainment, along with the actual birthday boy, who is not averse to singing with grand piano whenever there's one around, hence the theme of the cake. Pre-party, I was Mr Teacakes' helper and was given the task of slicing out the black bits from the Licorice Allsorts so that he might use them for the keys. I liked this task...so many unwanted colours of licorice crying out for a home. 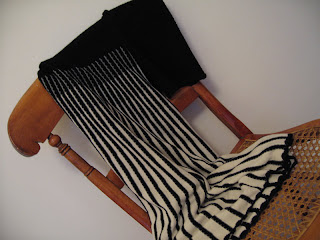 It seemed a suitable opportunity to wear my favourite dress: a knitted one that my sister bought for me as a surprise last year. I love all the different types of stitches used in its creation and the lovely scalloped crocheted edge that gives it the most wonderful flickyness once on...but mostly I love that it has a slightly 1960s feel to it, which is my favourite era to dress from. I realise that when you put these two pictures next to one another it might seem as though I had chosen to wear it in a strange bid to colour-coordinate myself with Mr Teacakes' cake...I can assure you that this was not the case and thankfully I spent the evening at the other side of the room from the sponge.

Moving around the tables was a magician from the magic circle...whose tricks were many and impressive and who whipped cards from my hand and hid them in his pocket without me seeing or feeling a thing, despite the fact that my palms were clamped firmly together with the cards apparently safe inside. Our taxi ride home was filled with plans to create a midnight feast that revolved primarily around a slab of brie and a french stick, as well as the need for a proper debrief as to how Mr Magic might have worked his tricks. The former was quite delicious, the latter produced no firm conclusions...as you might have expected.
Email Post