She's talking about that baby again! 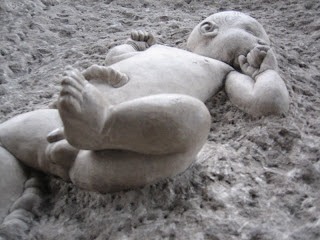 Permission to speak about the carved baby in my side bar just one more time? For I have the most lovely story relating to it. For those of you who have missed any mention of it here in the past, on the outer ring of Trafalgar Square there is a church called St-Martin-in-the-Fields, raised far up above the road by a long flight of shallow steps. On a tall stone plinth before the church doors there is a baby carved from stone, smooth and quite perfect, attached by it's umbilical cord to the ground that it lies on, which is, by contrast, rough and coarse. The baby is archetypal, with rounded cheeks, slightly curled toes, small clenched fists, and a wonderful plumpness to its small body. It is so perfect to me that I had never questioned how it had got there, who might have carved its little limbs, or when it might have been installed. It was just there. I have become quite attached to it and rarely visit London without also going to spend a couple of minutes marvelling at its loveliness. So you can perhaps imagine how utterly delighted and surprised I was to receive an email out of the blue from Rachel, saying that she had come to my blog as a reader of Raspberry (who had very kindly linked to me that day in her post) and that as she had scrolled down my blog she had thought it fabulous to come across a picture of the baby in my sidebar...as it was in fact her own husband, Mike, who had carved it. She included a link to her husband, Mike Chapman's, own website, which is home to even more sculpted wonderfulness. Do go and have a look...as his work is, in my opinion, just so very beautiful and I have found it fascinating reading the words that accompany the photography of his work. It also tells of a summer school that Mike runs so that he might pass some of his skills on to others...again, finding this out was a complete delight and I am quite sure that at some point in the next couple of years we will try to book Ian into this, as it is something that he would love to do.

Perhaps it's not comprehensible how excited I was to receive this email unless you too have fallen in love with this baby, but it was one of those moments when my heart felt like it was about to burst with happiness, for if I ever had thought about who might have created the infant (for some reason, I hadn't, perhaps because it looks so perfect that the idea that it had been chiseled away and formed by human hand seems quite absurd) I would probably have guessed that it was carved hundreds of years ago by a team of men....so to find that it was one man, very much alive, with the most perfectly lovely wife who reads craft blogs...well, I was stunned. 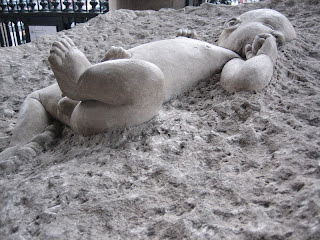 There is something so lovely about the roughness of the earth that this perfect child comes out of, as if to say that no matter what the state of our world, each child is born into it perfect and unblemished, and the fact that this is set in stone is, to me, emblematic of the certainty that this will always be. What reassurance of goodness this sculpture provides. Rachel told me that the sculpture is in fact named The Christ Child, which was created for the Millennium to celebrate the birth of Christ...which somehow threw me for a moment as, not having a faith myself, I had never imbued the baby with any religious associations...but actually, like all art works, I think any viewer will give it their own meaning and so although I'm now mindful (and I can't write that word now without smiling for, following my best-loved words giveaway, I know that it is one of Robyn's favourites) that it was created with a particular representation in mind, to me it will always more strongly hold an element of both of my own children in it, as well as the lovely innocence of infants...I love to think of it lying safely on its stony bed, blissfully unperturbed by the drunken revellers that carouse below it around Trafalgar Square on a Friday night.

I was quite fascinated by what Rachel's house must be like, as my first thought was that it must be so strange (although obviously very normal if you're Rachel!) to live with someone capable of creating things quite so extraordinarily beautiful all over your home...so of course I asked her, and it does indeed sound like their house is full of special things, (such as a stone mouse carved running up their fireplace), but actually I've come to realise that Rachel is more than capable of her own lovely creations...and I'm left convinced that if she ever chose to start a craft blog it would be full of the most wonderful things.

I think to me the coincidence of Rachel seeing her husband's work on my blog represents how far-reaching and extraordinary blogging can be...even with a relatively small readership, so many different sorts of people will pass by the pages...and ultimately the world seems very small. 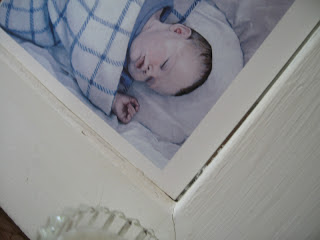 I have a photo of the stone baby tucked into the frame of my mirror, next to another baby that has also become special to me. When I was a couple of months pregnant with Dinosaur-boy my sister sent me this postcard of a painting by Blaise Smith that she'd seen at the National Portrait Gallery as part of the 2003 BP Portrait Award exhibition. I adored the colours in the painting and propped it up on our bedroom fireplace in the house where we lived at that time, purely because I liked the way it looked...but a couple of months later I found that I felt incapable of taking the postcard down; I had looked at this baby each day and become more familiar with its face, the folds of the blanket that it lay beneath and most especially had come to treasure the pose of its hands, so much so, that it seemed to have come to represent the baby growing in my own ever-expanding middle. 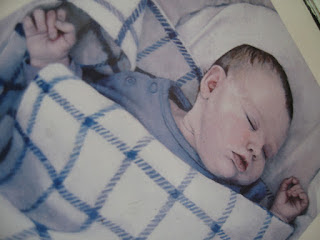 The reassurance of seeing this baby each day, sleeping beneath an identical checked wool blanket to the one that was folded in my airing cupboard, was great. It is only more recently, that a very dear friend walked into our room and looked at the pictures propped in the mirror frame, and commented, horrified, that the baby's slightly grey, lifeless skin made it appear to be dead...I can see exactly what she means, but to me it is a happy contented picture, proving as I had said earlier, that every person will view an artwork differently. For me this baby sleeping so sweetly has become so muddled with my memories of Dinosaur-boy sleeping in his crib that it is as much one of his childhood photographs as any that actually picture his true self.

And while I'm on the subject of babies...I've just read Lisa's latest Craft Boom post where she interviews Amy Butler and have seen that her next book is focused around patterns for mother and child 0-12 months..,what an incredibly powerful incentive to have more babies...but no, I will buy it in September when it is published and make things instead for the lovely babies of friends.

I also must say that my sister has drawn it to my attention that I have recently only blogged once in two weeks...sometimes real life crashes in to such an extent that blogging temporarily takes a back seat...but I feel I ought to apologise for the huge amount of unanswered emails and messages (currently over 300) and the fact that I haven't commented for so long on so many of my favourite blogs. I am delighted by every single one of the comments that people are kind enough to take the time to leave, and I have enjoyed catching up with so many of the wonderful blogs that are my daily reads on Bloglines...but time feels sparse at the moment and my mind is elsewhere, so I hope you won't mind if I am temporarily a little un-interactive!

Wishing you all a lovely weekend in the sunshine.