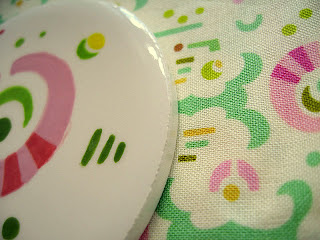 This week I went and collected from the ceramics studio the pottery that we had painted during half-term. Above is my coaster that I based on a Heather Bailey print. I was most delighted by Dinosaur-boy's rabbity eggcup though. He put much effort into daubing it and it looks so bright and lovely, now that it's been glazed, that a tea of egg and soldiers was rustled up that very evening to celebrate. 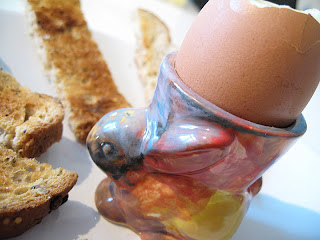 Another wonderful new addition to our home is this vintage Singer sewing machine. On Sunday morning all the other Teacakes were off gallivanting when my father surprised me by knocking at the door with this wonderful machine stashed in the footwell of his car. 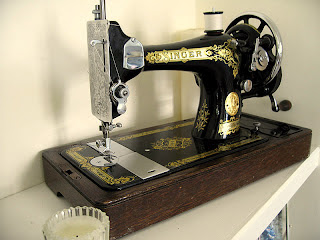 He had been off 'booting' (as he calls it) and had parted with £4 to buy me this virtually unused piece of loveliness. The old man who sold it to him told him that it had been his mothers and while the wooden travel case that it has lived in for all those years is quite battered, inside, the actual sewing machine is pristine...just look at those shiny unscratched unworn plates! 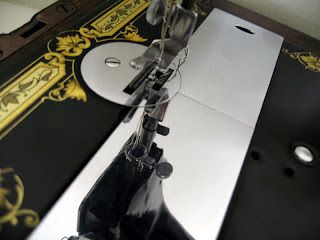 It has a bobbin shaped like a torpedo and the minute I'd worked out how to put it back into it's correct place (which took longer than a minute) I had some material under its foot and was delighted to find that it is capable of producing perfect stitches. I have to admit to finding even modern sewing machines breathtakingly beautiful...so you can imagine my feelings of wonder faced with carved scratch plates and golden decoration...and quite how touched I was that my father had been off investigating all things stitchery-related in a muddy field at 6.15 in the morning. 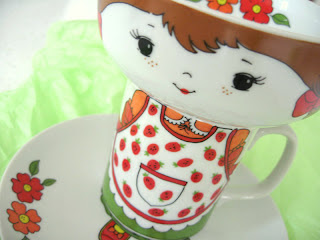 Also this week we received in the post this fantastic little cup, bowl and plate set that we had won on a giveaway on the Hurrayic blog...I was so delighted on opening the box to find that, despite her long journey over the seas, she was perfectly intact. The little Teacakes have had so much fun lining up all her body parts - isn't she lovely! Thank you, Ellen. 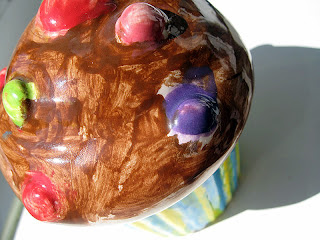 Above is Zebra-girl's cake pot that she made. Out of interest Dinosaur-boy and I checked whether it will actually hold a single cupcake, and our experiments revealed that it is the most perfect fit, which was pleasing, even though I then had to tell Zebra-girl that 'cupcake holder' will not be its ultimate purpose as that would mean that a constant supply of baking would have to find its way up to her bedroom.

We are hopefully getting our car back today, after it was towed to the garage last Sunday...I am excited, not because I actually want to go any where in it, but because I know that they will have washed it for me and it will be pleasing to live for at least the next week pretending that I am the type of person that bothers to wash the car....I wonder if this necessitates the wearing of different clothes to truly become the embodiment of my new imagined persona...first I shall have to think about what such a person might wear. Additionally, I think that its return may force some of Mr Teacakes 'rules' to be rewritten. You see, after the dish cloth accumulation crisis, Ian decided that our shopping bill would be less costly if he took charge of the weekly shop...however, since we purchased our car it has broken down four times, and on each occasion it has been on a Sunday when Mr Teacakes has been driving home from the supermarket...to me this can only mean one thing....our dear little car wants me to buy MORE dishcloths! Horay! I am so happy that it feels this way that I may even set one of them aside to give its bonnet the occasional polish.
Email Post