Lowering the tone in Liberty...

All week I had been counting down the days to the weekend, which for me, officially began on Friday afternoon when my parents came and collected the little Teacakes, leaving Ian and I to meet later for dinner. Mr Teacakes tried his best to persuade me to drink more than a little, but despite earlier kind assurances from Lisa that she would arrive with Neurofen in the morning, I was determined not to be the green girl in the corner again - as was my way on our last meeting - when I was due to meet up with Lisa, Joanne and Helen on Saturday. 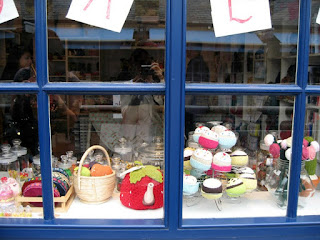 Our meetings are ostensibly arranged around fabric and haberdashery shopping, but actually these things just provide a backdrop and occasional distraction to our constant chatter and cheek-ache-inducing laughter...the ratio seems to be five broken minutes of actual product perusal to half an hour of loitering around a fabric stand that temporarily morphs into a make-shift living room as we get stuck on discussing such things as why someone might make their own knickers (a crafting step too far...we thought) and what materials might be involved in their construction, to where one might go to achieve the best eyebrow shape (that would be here...for reasons too numerous to mention). Wonderfully, we stumbled across what I think was this book (I can't be entirely certain, as our focus quickly shifted to what was inside the book) only hours after it first came up in conversation...the pictures revealed strangely hair-free men wearing red and black polka dotted, lace-edged boxer shorts (perhaps it pays to be more aerodynamic when wearing such a garment?), the finer points of gusset insertion, and other gems - you can only imagine our delight!

Pierre Victoire was our chosen venue for a merged lunch and dinner, followed by cocktails at our past haunt, the 5th View Bar in Waterstones Piccadilly. Mr Teacakes joined us for last orders, having spent the day meeting up with his own friends, and then led me in a mad dash across the West End to try and catch our last train home before pumpkin-time...sprinting and Hazelnut Martinis aren't the best mix, but the alcohol at least served to anaesthetise the pain in my feet as they pounded against the pavements with only a worn millimetre of ballet flat sole between them. As we had bounded down the five flights of stairs in Waterstones and reached the bottom I could still hear the laughter of the others echoing down the stairwell as they waited for the lift above - what lovely, lovely girls. I do hope that we are still meeting up for these days when we are old ladies.

Here's Joanne with her latest and most wonderful bag...I stopped short of getting a seam ripper out to see exactly how one particularly covetable part of it had been constructed...but only just (more details of inner zipped section here). 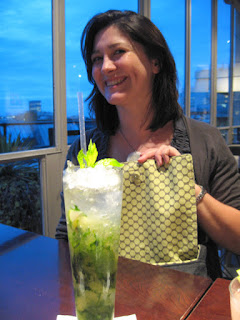 Here she is winking the lovely lining...she chose her drink to compliment it, obviously (well, she didn't really, but it was a pleasing coincidence)... 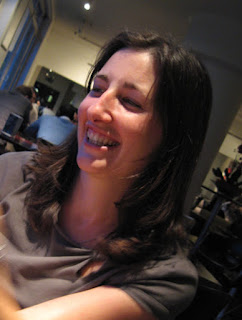 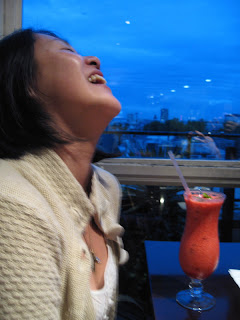 ...and Lisa, howling with laughter - I love this photo.

I woke to find that, like Helen, my head was pounding and my will to pull myself out of bed was small, but luckily I had helpers to get me up who were so pleased to see us after two bedtimes without, despite having had wonderful adventures with their grandparents.
Today found all of four of us on the train up to London again, this time to visit Ian's sister...where the children tried on their bridesmaid and page boy outfits for her wedding, and we ate far too much delicious food.
What a perfect weekend.
Email Post