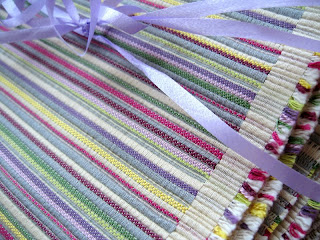 I so love this fabric. One of our local shops makes absolutely beautiful curtains and is cavern-like with it's fabric-covered walls and drapes thrown over every surface...the average price for a metre of fabric in there seems to be around £70, but they do have a wonderful remnants bin (which obviously is the only section I allow myself to look in). Recently I found this striped fabric, originally priced at £42.50 per metre. I came away with 1.7 metres for an awful lot less than that - and its selvedge is so beautiful that I'm almost tempted to work it into a project somehow. 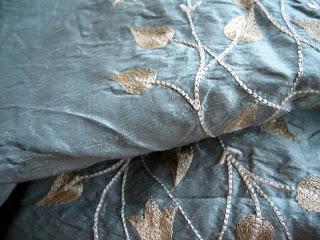 Well over a year ago I also bought from there this beautiful silk - it is a huge piece, enough to make one side of an eiderdown (that word was for you Mrs Molly Cupcakes!) or double quilt with....but I feel quite terrified to use is it as its original retail price, before it found its way into the remnant basket, was more expensive than I could possibly have believed, so there are downsides to having such precious fabrics! I'm interested to know what kind of quilt wadding do you use for machine quilting, how do you decide which to use and (not for this project, but more for cottons) what kind of wadding is it that once washed gives the fabric that old and crinkled look?
The little Teacakes both had friends round to play today, the mother of one of whom came to collect her daughter and gave me two wonderful large marrows fresh from her garden. I wondered what I might use them in and quickly decided I would like to make some soup. 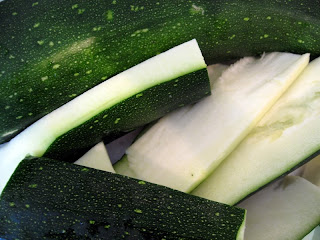 It was ready just in time for the children's teatime and both declared it the best soup they'd ever tasted and asked if they could have it every night. I was more than a little delighted by this, as Dinosaur-boy especially, isn't always complimentary about his suppers and the sight of a risotto being served has been known to reduce him to tears. 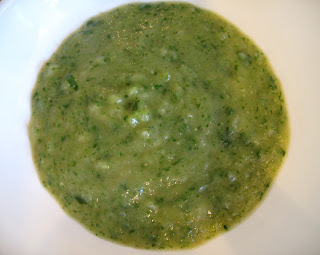 After googling for information on how best to prep a marrow, this is the recipe I created from the other things that we had in the cupboards that seemed to be generally regarded as being complimentary to marrow.

1. Peel and de-seed the marrow and cut into small 1cm cubes
2. Chop the onion, potato and sticks of celery into small pieces
3. Press the cloves of garlic
4. Make 1 pint of stock using the four vegetable Oxo cubes
5. Boil all of the above ingredients together in the stock in a large pan for 20 minutes, adding generous amounts of Cumin, paprika, nutmeg, salt & pepper.
6. Turn the heat off, add the spinach and stir in until wilted
7. Blend the soup in spurts for no more than 20 seconds to produce a roughly textured, thick soup.
8. Add a knob of butter and stir until melted
9. Pour in a slug of milk and stir.
10. Serve topped with fresh herbs or a swirl of cream (we had neither of these, but I imagined them - of course it looked fantastic!) and crusty bread. 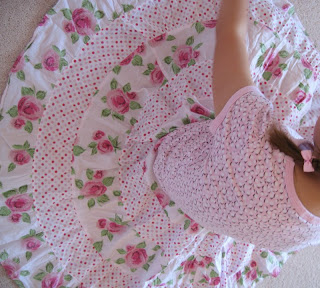 And finally I leave you with a picture of my little Zebra-girl. I came into her room this morning to find her arranging her skirt around her in a giant circle - how lovely she looked: a small little body and head with a smiling rosy face in the middle of all that beautiful fabric.
Email Post