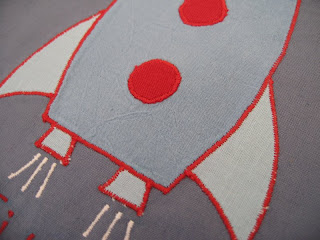 A couple of weeks ago I finished sewing in all Dinosaur-boy's school name tapes, but then I suddenly remembered on Friday that I had his PE bag still to make. On a trip into town he picked out this rather sober blue fabric for the purpose and asked me to put a picture on it. His initial request was for a builder doing some building, but I had my doubts about the longevity of any Bob-like creation and wondered whether he would still feel happy about his choice aged 8...so we compromised on a space rocket. 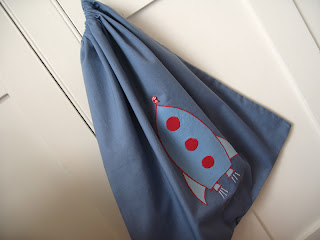 I have embroidered his name beneath it. This is my very favourite type of project - virtually a blank canvas just to applique on to - sometimes I feel quite desperate to sew in this way, but am exhausted by the idea of also having to construct whatever item it is that the applique will be attached to. Making applique pictures to go on the wall seems the obvious solution to this, but there's something in me that also wishes for the things I make to have a function. As I made this Zebra-girl sat next to me and hand-sewed a bag from some of the fabrics that Hazel gave to her...she still has to put the handles on, but she has done a beautiful job and is getting quicker and quicker. As we tidied away when we'd finished sewing she told me how much she liked folding up her fabrics because it felt like they were her friends and they reminded her of me...it's so funny how children can change from being loud and boisterous one moment (well, more specifically in this case repeatedly singing the lyrics to Witch Doctor which are something along the lines of...Ooh Eeh Ooh Ah Aah Ting Tang Walla Walla Bing Bang) to saying something so unexpectedly sweet that it makes you want to cry the next. And oddly I knew what she meant...part of the reason why I love my own fabrics is nostalgia and that occasionally they have the ability to suddenly remind me of my mother's summer dresses and the feeling of her being close-by as I played in the garden as a small child. 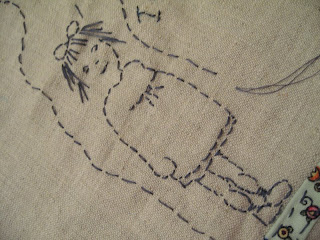 This weekend Mr Teacakes has been playing at a small three-day festival. On Friday he told me that he would be giving away free CDs of some old previously unreleased tracks and that he would like me to design a cover for for it. The title track was to be a song called 'I know how it feels', a song that he wrote about Zebra-girl two years ago when she first started school, so shy that she was barely able to speak. He told me how he envisaged the cover looking and then went out for the evening leaving me with the instruction to 'make it a bit messy'. Mmm...abstract images and messy stitches may be something that occasionally come to me accidentally, but rarely intentionally, but this is what I came up with, finally finished at 2am, long after he had returned home and gone to bed: 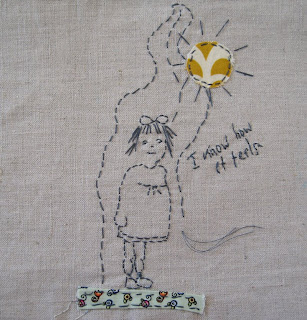 One of my favourite lines from his song is:
Draw me a sky.
With a bright yellow sun.
And if you're lost in the dark like a scared little spark you can...
Follow it home.

So that's where the large sunshine comes in...and it seemed like a good opportunity to add a little Amy Butler into the mix. 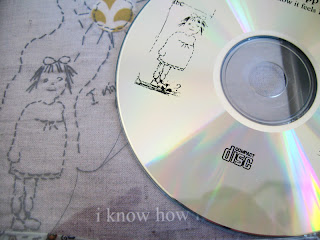 Somehow I was more pleased by the girl that he burned on to the actual CD...partly because it looked less recognisably 'mine', but also because there's something nice about seeing your stitchery transformed by a different medium and I liked that Ian had added some computer-created scrawl around it. 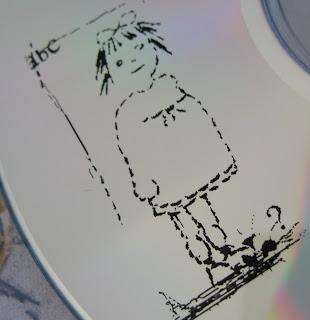 Anyway his free EPs all got snapped up (as free things do) and we had a lovely afternoon in the sunshine watching Ian and some of the other bands play their sets and chatting to friends who came along. My sister flew in from Nice this morning and turned up wearing the most amazing dress...which she has asked me to recreate for her in a different colourway. When we got home this evening we discussed possible fabric choices and I am feeling vaguely optimistic that it won't go the way of my mother's mermaid-cut skirt...because it is a shift dress and so by its very nature it is not meant to cling to every curve...also because Laura tried on this dress that I made so long ago and that was on the small side for me. It looked perfect on her, so at least I now know that I can make clothing that fits a real person - horay! I noticed that in Laura's own dress there was a neat little flap of material inside the neck that I knew I'd want to replicate when I come to remaking it...but without knowing the technical term for what exactly this flap was called I was left with no Googlable search terms...luckily on the basis of my vague description Helen (of Angharad...which I've just accidentally found out as I was getting the link for this post means 'loved one' in Welsh - isn't that lovely) was able to tell me that it is called a facing (this link is for a skirt facing, but you get the idea...just in case I'm not the only one not to know what a facing is).

Anyway, I have wibbled on for quite long enough - perhaps I should put in a self-imposed word count limit. Wishing you all lovely Bank Holiday weekends. x
Email Post