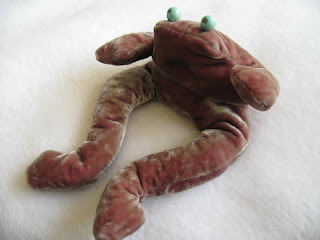 Somehow two weeks have passed and not only have I failed to do any blog posts, but I have also found that I have barely even turned my computer on during this time too (my eyes are now round again - what an odd look that is). I realise this coincided with Dinosaur-boy starting school which may have caused some to worry that I had plummeted into a depression, sat pining at the school gates, or even eaten my own body-weight in chocolate buttons in an attempt to console myself (thank you lovelies for your emails checking that I was still alive). Pleasingly none of the above are true...what has actually happened is that despite the cunning appearance of more time, this has proved to be a strange mirage, and in reality I seem to have far less. But the hours I do have, have been filled almost solidly with stitching and I think it is fair to say that I have never had a time where I have sewn through quite so many yards of fabric, but more on those things in later posts. 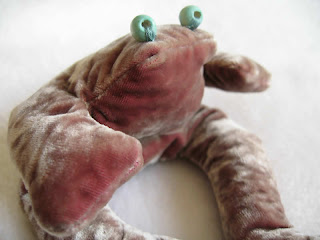 Bobbling round in my thoughts as I have stitched my way to the midday pick-up time at Dinosaur-boy's school is how my small ones might have been getting on. Both have had tearful moments at dropping off time, which is why we came up with a variation on a star chart. Mr Teacakes drew each a picture with areas of it numbered one to five and each tear-free day meant that a part of it could be coloured in and then given a stamp (we all love this stamper, which was a gift from a friend - I think she said she ordered it some time ago from here). A four storey house for Zebra-girl and a rocket and some aliens for Dinosaur-boy, once all the areas had been coloured there was a treat promised. 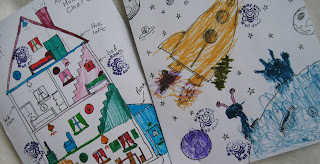 While Dinosaur-boy, who is already in possession of a bean-filled frog, was eventually awarded some Cath Kidston playing cards featuring every kind of mode of transport imaginable, for Zebra-girl I made this velveteen frog. It hadn't occurred to me when I bought this fabric, but when it began to morph into something animal-shaped I suddenly realised that it felt to me as though it were the exact same shade as the rabbit in The Velveteen Rabbit... subsequently, no amount of looking through the numerous covers on Amazon is bringing up a rabbit resembling the one in my head, so perhaps it has changed in my memory over the years, but it pleased me to think of the book as I was making my frog version. The fabric is so very soft and strokeable, that it now seems much more obviously suited for children than the handbag that it was originally intended for. 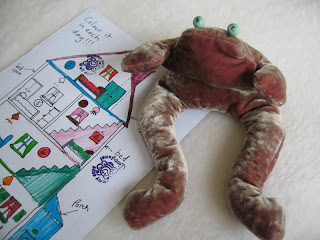 So anyway my brief two-week stitching news round-up is as follows: I have received some exciting stitchery books in the post (every single one of them creased even though they had all been posted separately and arrived several days apart...thank you Book Depository!), dipped my feet into the waters of quilting and found that it may just be my new favourite thing (which I'll wibble on about more in another post, as when I was researching it I longed to find a simple tutorial that told me the basics of what to do with some tips thrown in, without being a part of a very involved pattern, so perhaps this might be something others would find useful?) and found a new fabric marker pen that is currently rocking my sewing corner with its sheer fabulousness. I think I have found The One this time. The others pale by comparison.

I have also sewn enough things to keep me in blog pictures for the next decade...but with so many of them being birthday gifts it may take a while before I can reveal them (please let the results of this be quality as well as mere quantity!). But for now sewing has been temporarily ceased for an evening while I wait on an order of velvet to arrive by special delivery tomorrow so that I can get on with the next stage of the curtains that I am making for my mother to give to Zebra-girl for her birthday...I have banned myself from starting another project before they are finished for fear that they may end up being abandoned altogether, for curtains are troublesome beasts...there's just so much of them - in this case 22 metres of material, 18 metres of velvet ribbon, endless winding of bobbins...(at times I have felt tempted to mummify myself with these supplies, rather than to continue down the path of window dressings, but thankfully I have had the calming influence of Mama only a short drive away, and whose vast floor of perfectly aligned limestone slabs has acted as the most wonderful grid on which to measure large quantities of material). This means that tonight is a whole stitch-free evening in a month where sleep has felt like the most appalling inconvenience...I think I may go to bed immediately in preparation for the commencement of curtain battle mark III in the morning. Sleep tight. x
Email Post