Where the weeks have gone... 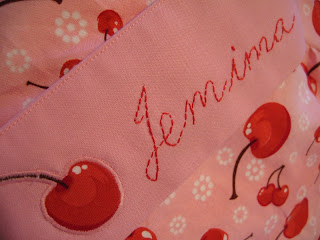 Well, goodness, somehow three weeks have gone by and I'd very nearly forgotten my Blogger password. Fair preparations, Christmas shopping, and some custom orders have kept me away...and there may have been a small case of having an extra week away to catch up on all the things that had fallen to one side. Above is a finished item that I really believed may never see the light of day - I had been asked to do a custom order for three enormous children's beanbags a few months ago to be given as Christmas presents and the logistics of making them rolled around my head the whole time I was focusing on making things for the fair...should I use a stretch material inside, how many metres of fabric exactly would I need, how could I work out how many cubic feet of beans I should order to fill each one, what closures should they have, what shape should they be...I worried and agonised over every part of their creation, perhaps because my biggest fear was that a delighted child would launch themselves onto one on Christmas morning only for it to burst and shed beans in every direction. It feels such a privilege to be asked to make a parent's Christmas presents for their children...and with that comes a great feeling of responsibility for getting it right. I had this cherry fabric shipped over from the States for the two girls' beanbags and then used this blue polka-dot Laura Ashley fabric for the boy's beanbag. 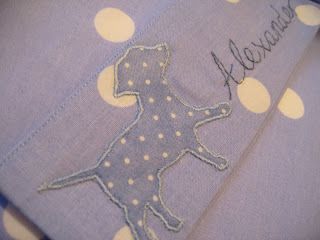 Each has a tag that they can cart the beanbag around with, and on each tag is an applique picture and the child's name. 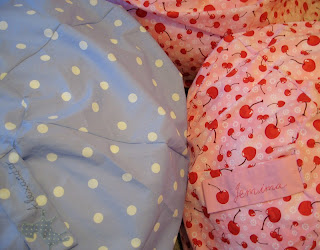 They are huge and I am still worrying that there aren't enough beans in them, but my research concluded that they shouldn't be overfilled in order to be comfortable...there is 12 cubic feet worth of beans spread between them...I so hope that is enough.
Another custom order came from a friend who liked the glasses cases that I was making when she called around one day. When she accompanied me to the sewing shop on a fabric mission a couple of days later she saw this ready-made crab applique and asked if I would use it on a glasses case for her little boy. I've never used a pre-formed iron-on applique before and ended sewing it on too as I didn't trust the glue to hold it in place, but I was surprised by how much I loved the way it looked in the end as I love the orange and blue together. The red rose case was another commission.

Here they are wrapped and ready to go...oh dear...I am so loving the tangeriney orangeness...and there's so little of it in my stash that I think I can sense a new addiction coming on. That's the wonderful thing about custom orders...you end up trying things that you'd never think of making yourself. 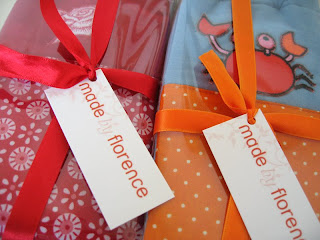 And finally the craft fair...what can I say? It wasn't a huge success. Below is a picture of some of the things I'd made laid out in a test-run of table-setting-up a couple of days before the fair. The evening of the fair brought torrential rain and as I wound my way cautiously down the country lanes to get to the tiny village where it was to be held I felt panic stricken by the fact that I could barely see the road through the rain and also because every time I went to flick my full-beam on and off I would accidentally hit the indicators on and off too, which I worried may make me appear drunk or just insane to any oncoming cars. So a tiny country village with only a pub and a church...a wet and windy night...yes, the only result could be that stallholders weren't far off outnumbering customers. My lovely friend who I'd mentioned in my last post, arrived to give me moral support with flasks of tea (herbal for me, strong builder's tea for her), a selection of sustenance to be surreptitiously nibbled at, and a large dollop of loveliness and giggling that sustained me throughout the evening. I think I made five or six sales, but one of those was made by the same lovely friend, which she vehemently denies was a sympathy purchase, so I shall instead just feel touched by her kindness and be very thankful that she was there with me - I feel so lucky to have such a sweet friend who knew I would need her without having to be asked. 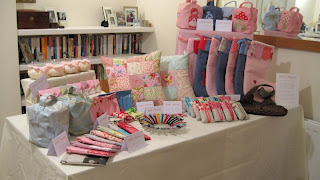 When I got home that night, Ian, just like my friend, was just what I needed him to be and carefully rooted through my wares claiming that the living room was in desperate need of a doorstop...he was right, it is, and when I'd been making one in duck-egg blue and gold I'd secretly hoped it wouldn't sell as I knew it would go with our rug so nicely...I'd just hoped that some of the other things would sell a little better! My instinct that night was that craft fairs weren't for me and that the weeks of work that go into creating enough things to fill a 6ft long table had been too much effort for too little reward, but actually with some distance between me and the craft fair, I can appreciate that I'd possibly try it again next year if I felt more confident about the number of people that might be at the venue.

After so many weeks of sewing I'd planned to have a couple of days off after the craft fair, before starting on the beanbags, but I surprised myself. Walking home from school after I'd dropped the children off the next morning, I realised that inside I felt quite wobbly and unsettled by the whole experience and that the only thing that I would find truly comforting and restorative would be to sew...happiness is a rainy morning with the heating turned up high, Woman's Hour on in the background behind the gentle whirr of the sewing machine...and knowing that you are sewing because you want to with all your heart...and not because you have a 6ft table to fill.

I now need to photograph some of the things for my shop...but time keeps running away with me and the light isn't lending itself to sunny, warm photographs. I have so much more to tell, but for now I will go to bed and leave you with a book recommendation: Blood of Flowers by Anita Amirrezvani - over 400 pages which I gobbled up in less than 24 hours; a tale set in 17th century Iran filled with beautiful floral descriptions of the knotting of rugs and the repression and passions that are woven into them. Quite perfect.
x
Email Post