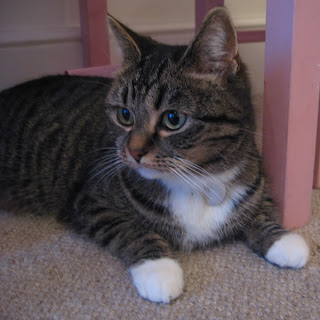 Well, I had promised that my next post would be full of details of all the stitchery that I have been up to in my blog absence...but after so much useful input on the cat quandary that I mentioned that I was in during my last post, it seemed entirely wrong to not let you know that you are partially responsible for the new feline presence in our house and the delight of two small children who wake from sleep an hour earlier than usual and race straight down to the playroom to greet their already beloved cats. After trawling rescue centres for just the right ones, I eventually found these two beauties who are two and nearly three. After visiting them with my mother, I then needed to have our home inspected to see whether we would be suitable adopters...and how very nervous I was. I was cast back to the feelings that my friend and I had while pregnant when the Health Visitor was due to come for our home visits. Perhaps bizarrely, in retrospect, we both felt compelled to clean the inside of our ovens in case this was the type of thing that they would wish to inspect (for the pregnant amongst you, if home visits are still in existence, I think they're actually coming to check that you're not feeling too overwhelmed by everything and so that you have a friendly point of contact once your baby is actually here...it is now inconceivable to me that one would ever dream of requesting to look inside your oven). Anyway, seven years later, nervously awaiting my home visit to adopt a cat, my pregnancy friend of old, knowing exactly what fears might be running through my head, emailed me with an order to stop cleaning and to try and relax. 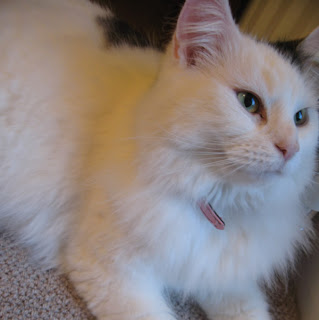 Home visit form signed (and yes, I did clean my oven, more as nerve-calming therapy than anything else), permission granted to be a few minutes late to school the next morning, I felt that I could now tell Zebra-girl and Dinosaur boy that we would be having some cats. What followed was utter excitement, an evening trip to the pet shop so that the children could buy gifts of toys and fishy treats, then the next day, a surreal headlamp-lit drive into the countryside in the darkness of the early morning so that the children could meet the cats before school, a race to get them back in time for 8.45am, and then another drive for Ian and I to fill in all the paperwork and finally bring our cats home. The beautiful little tabby was originally called Honey and actually once we got to know her personality it seemed to suit her so well that we kept it: she is nervous, gentle and has a sweet inquisitiveness that prevents her from spending her entire time hiding behind the sofa. Bella (originally Sheba) has been named after the elder sister in the Shirley Hughes book, Dogger - a big girl's name that, to me, tells of natural confidence. Our own Bella has such a vast coat of hair that she looks extraordinarily large, and wanders around demanding friendship and attention without a hint of timidity.

And me, I have been feeling a little wobbly. I am naturally tidy and have always been a little obsessive about things not getting ruined or spoilt in any way, which is why I had veered away from getting cats until now. But as Zebra-girl's longing for pets increased, so too did my unease at the idea of having to tell her when questioned in years to come that the reason she never had a pet was because I didn't want cat hairs everywhere, for the sofa to be plucked at, or for my fabric cupboard to be used as a bed. I knew that wasn't the kind of mummy that I wanted to be, even if that is very much what exists on the inside. And so we now have these two lovely cats who are bringing so much happiness to us and who desperately needed a home (having been in a pen at the rescue centre since August). But I do find that I am having to battle with the bit of myself that occasionally begins hyperventilating when I find that they have mistaken one of Zebra-girl's most beautiful hairbands as a cat toy. However, special cat-proof catches have been bought for my fabric cupboard, an amazing hairbrush which Joanne told me about has arrived (it promises to reduce shedding by 90% - Ian is on duty with it daily as I can be prone to being allergic to most things other than air and cold water) and a packet of herbal teas called 'Calm' which are meant to reduce anxiety are being drunk. I think it will all be fine. 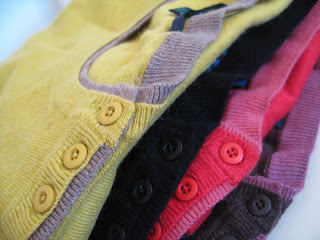 I shall leave you with a picture of this little stack of jumpers that I have purchased. I ordered one, and found that it was such a perfect fit and so warm and cosy that when I saw that they were in the Boden sale for less than £20 (and they are a yummy cashmere blend, so that really does seem uncommonly reasonable), well I found myself popping one of each of my favourite colours into my basket (and oh dear, there's one more too, and that one is stripy, but I was wearing that when I took the photograph). And just in case you are thinking that, gosh, the black jumper looks so very useful, are you sure you shouldn't have bought two just in case?...well, fear not, I had that thought too and so took the wise precaution of doing just that. I was a little embarrassed to send a thank you letter to my parents-in-law explaining that I had spent all my Christmas money on one thing in several colourways, but I knew that my mother-in-law would probably understand, as she can be partial to a little bit of Boden herself.