A cushion...and an unplanned rant... 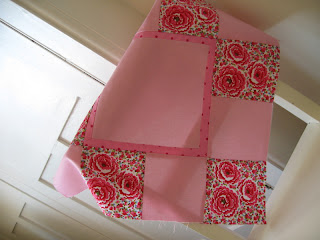 On the last day before half-term I finally managed to finish the front to a cushion that I've been making as a birthday gift for someone who loves all things Wizard of Oz. With an awareness that what delights a child at 4, might not hold the same appeal at 7, I tried to suggest at Toto and red slipper loveliness, without the references being so overt that it will have to be relegated to the loft once the Dorothy obsession has passed - although does it ever really pass? I know my sister & I still feel that a pair of red shoes has a magic about them that even a pair of more neutral-coloured Emma Hope's can't touch. 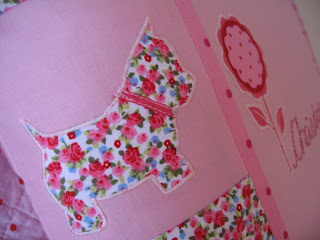 So Toto has been reincarnated in flowers and spots with a different collar and fabric colour combination for each dog. I imagined that choosing a favourite could be a relaxing pastime when sleep is elusive. 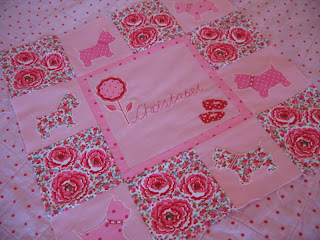 It was a little brighter than I expected...but actually, when I laid it on Zebra-girl's bed mid-construction I realised that it would have fitted in perfectly in her room (so removed it before she noticed this and asked to keep it for herself). 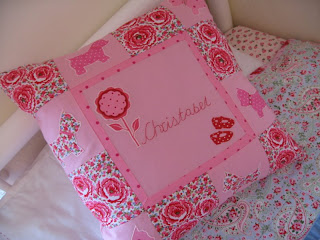 On the dog theme, we went to see Hotel for Dogs yesterday (despite it opening to reviews that suggest it's a little dull). I thought that the Teacakes might like it as the trailer reminded me of a film called Benji that I loved as a small child. It was actually quite good, which is saying something as on the whole I have issues with modern day children's films (which is why my children have a rather pre-historic dvd collection based around The Railway Children, Morph, Button Moon & Peppa Pig) in that the makers have created animated characters that tend to all talk to each other in an aggressive way laden with 'attitude'. As well as this, they tend to be splattered with inappropriate references (The Magic Roundabout would suggest that isn't a new thing...and yes, we do have a copy in our collection of permitted viewing!) but they've actually allowed the references to seep into the characters' behaviour, which while it may not be understood, may well be mimicked by those watching. We were amazed on putting on Toy Story a year ago, which I'd always assumed was a DVD aimed solely at children to find two of the characters acting in the most nauseatingly flirtatious way (and that is an understatement) toward one another. The meaning of the behaviour might go over the audiences' heads...but I certainly wouldn't want to see my children impersonating it.

Hmmm, now where did that rant come from? Perhaps I need to have an extra half-hour in bed and wake with less of a chip against Disney on my shoulder. Oh dear. Sorry. Climbing down from the soapbox that seems to have unexpectedly been erected, I hope that you all have lovely weekends. x
Email Post