For the love of Rod 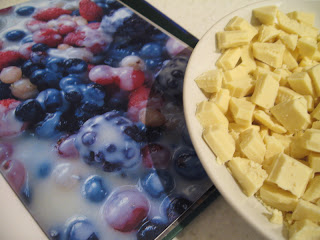 This is one of my favourite desserts photographed mid-construction. From The Ivy cookbook, it's also the dessert that Ian and I chose to have at our winter wedding eight years ago. Frozen berries covered in a hot white chocolate sauce...the sensation of eating the sweet hot liquid and the cold, thawing berries is quite magical. 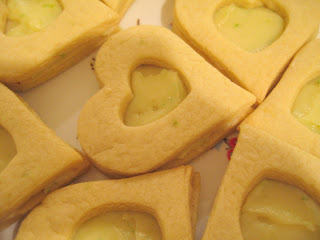 I have also been enjoying baking these heart-shaped shortbread sandwich biscuits with a lime flavoured cream filling. And trying to recreate the loveliness of my sister's spicy cheese stars as a treat for Ian's birthday...but we both agreed that she makes them much better...and that I need to go back to the classroom next time my sister is home. 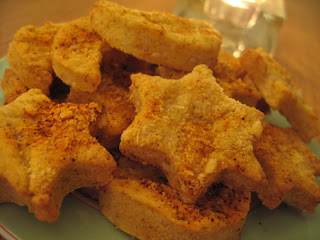 And just when you thought I might have had all the doorstop fun I could take (or just when you were hoping for a post that didn't involve sand-filled stitchery), I have one more to share. This is the final contestant in my quartet of recent adventures with anti-door-banging-devices. The applique for these takes so long that when I recently made a grown-up, non-appliqued doorstop I realised that at my starting point of assembling the actual doorstop, for the applique version I had begun to think of this stage of construction as the home-straight. This one is actually an order from just before Christmas for a sea-creature obsessed little boy who loves orange. 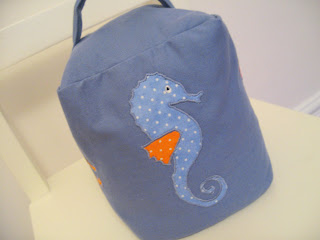 This week I have been making bags...after my last post where I'd been thinking about doing a large applique picture for the playroom I started it, but nothing felt right. Then I realised that guilt was stopping me from enjoying it and that I'd feel much better if I made a few summer bags for my shop first. And actually, after the tiresomeness of bulk pattern-cutting I've really enjoyed spending whole days with uninterrupted time in front of the sewing machine. Rainy and cold, the perfect weather for cosy stitching. 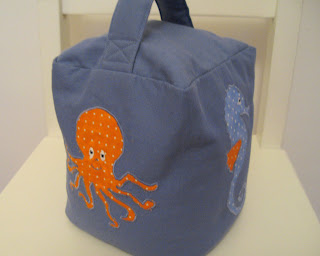 I used to turn my laptop on so that I could listen to music while I was sewing, but it's been so nice to be able to leave it turned off since Mr Teacakes treated me to an Ipod. I have realised that I am a one-dimensional user though...it sits firmly in its docking station after my few trips out with it left me suffering from a strange paranoia that I might be breathing too loudly as I walked along with the headphones in. No amount of temporary earphone removal to check that, yes, breathing was normal and not audible to passersby left me comforted...it only got worse and I found that I was holding my breath to try and solve the problem altogether. It seemed I had to choose between killing myself or confining use to speakers in my own home...so I chose the latter, but with an awareness that I am decidedly uncool and with a new admiration for those that swagger nonchalantly down the street with their earphones in with a complete lack of concern as to whether they might be loudly hyperventilating unbeknown to themselves. My friend, the lovely Miss L, tells me that she thinks this is a deep-seated wish to apologise for my very existence. I don't think it is that though...I just think I'm a little odd at times.

Poor Mr Teacakes now wishes the docking station would spontaneously combust. On several occasions he arrived home from work and asked worriedly if I was listening to Rod Stewart. No, I replied, it must just be someone who sounds like him. Eventually though, I wondered whether all these people I like who sound so similar to Rod Stewart might actually mean that I would like Rod Stewart himself. A quick iTunes session revealed that I knew more of Mr Stewart's songs than I'd ever imagined and that, actually, I loved them all! I think Mr Teacakes may be plotting the removal of the docking station so that his ears aren't polluted by such things. An event which would mean that I would then have to choose between a life without Rod or potentially killing myself by risking using the earphones again. It would be a difficult choice. But while I decide, in Ian's presence I am listening to a play list which I have entitled 'Songs That Ian Will Like Too'.
Email Post