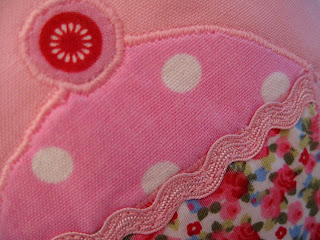 Well, my last post may have held promise that I was about to break down my own colour barriers and go completely wild and make something in lilac or green...but alas, a girl can only handle so much change at a time...and I had said previously that due to my lack of blogging recently, that the stitchery that I wanted to share would be from the archives: before the enlightenment. Although I do think it is possible to be colour enlightened and to still love a pinkish hue too. 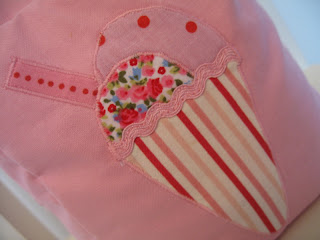 I was commissioned to make this doorstop just before Christmas for some little girls with a new house and a bedroom door that wouldn't stay open, and I think it's one of the things that I've most enjoyed making. Ever. I took inspiration from the chocolatey ice cream cone that I'd made made to go on one of Dinosaur-boy's t-shirts years ago when he was very small - that original one is hand-appliqued with a blanket stitch as my one attempt at machine applique had left me feeling weepy and confused as to why the machine had been so intent on actually trying to eat the t-shirt and suck it down into the bobbin case - the machine was put away for a few months before I felt strong enough to try again. But actually, I really love the old ice-cream cone as I didn't have a clue what I was doing and it took me four days - yes four days! - to complete it and I had a ridiculously huge sense of achievement once it was finished). Anyway, four years on I attempted to reincarnate it in pink and, to me, it was one of the most delicious things imaginable to pick the colours for and it was so lovely to be able to cram all my favourite fabrics into one creation. 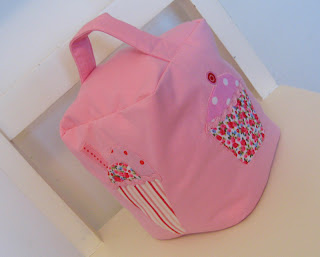 Words can't quite convey how happy I was when I found a floral print that featured a flower with a centre that was so obviously destined to be repurposed and transformed into a cherry on top of a fairy cake. It would seem that I have found that true happiness lies in replicating party food in pink. 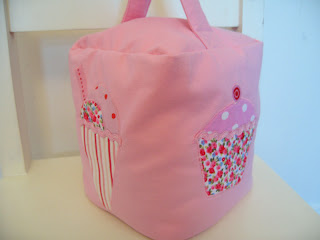 For the rest of my family happiness has been found in making a snowman called Freddie and watching him stand smiling as all around him begins to melt. 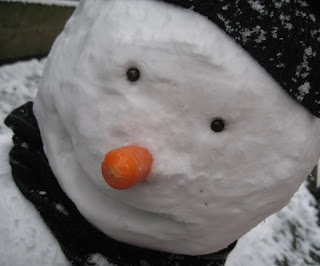 My head is feeling a little flibbertygibberty as to what to do now. I have bought lovely fabrics to start making up spring and summer bags with...but I feel strangely drawn to first being completely self-indulgent and instead starting on an idea that has been crystallising in my head recently. I'm longing to make for the children's playroom a huge applique picture filled with different places to live. I have really strong recollections of a book I had as child where a whole double page was filled with everything from houseboats to bungalows (the illustrations were reminiscent of the wonderful and eccentric Richard Scarry...but over the years I've tried to hunt the page out in his books and doesn't seem to be there, so I've no idea what book the pages were actually from) and I remember spending hours pouring over all the different styles of doors and windows and trying to decide which house would be the most perfect home. My children love this same element in a modern book called You Choose!, where the readers can pick not just houses, but who they'd have for their family and friends, what would be inside their house and what their job would be. It's an amazing book which fascinates them, although I've never felt drawn to the style of illustration used in it. Anyway, I discussed my idea with them last night and I was really surprised by just how enthusiastic they were and, guessing that there was going to be no school today, they were still busily drawing pictures and diagrams for me and making suggestions as to what details they wanted included an hour and a half after their bedtime. Decisions, decisions. It just feels far too wintry to be making summer bags yet.
Email Post