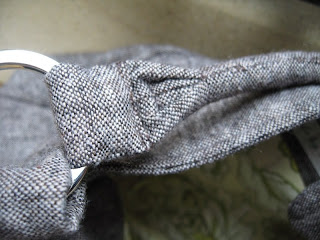 I have been wanting to make my mother a bag for a while now. With a near-frozen shoulder she had been told that her bag carrying should be done by hand, which is most upsetting for her when her whole bag wardrobe revolves around the longer-handled shoulder bag that would almost graze the ground were she to carry them by hand. So when Jo recently suggested a jaunt to Fabrics Galore in Lavender Hill to break up the terrible monotony of talking, giggling and cake-eating (which can be such a bore) that we had planned one weekend, I thought it might be a good place to find some suiting for my mother's bag. But gosh, I had quite underestimated the fabulousness of Fabrics Galore, for they had bolts of this wonderful Paul Smith suiting that I knew would be perfect for my lovely Mama, for a price that made me want to cry with happiness. Well actually, the whole shop actually made me want to cry with happiness, not least one of the wonderful shop owners who was was wearing a self-made shirt with the most divine detailing on - there's something about the rarity of a man who can sew and will go to any lengths to track down the right fabric for a project that is most delightful...his sewing was rather edgy and avant Garde though. I felt rather dull and suburban in his presence. But sewing inferiorities aside, the bolts of Mini Boden fabrics will have to wait for another post, but yes, they also had Mini Boden fabrics and, unable to decide between any of them, I came away with half a metre of several...which is never a particularly useful amount, but that's the price of indecision. Oh to be more like Helen who was also indecisive, but wild enough to go for a whole metre safe in the knowledge that she will actually be able to make things bigger than a small handkerchief. 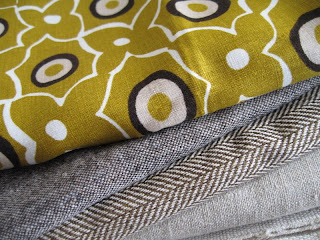 So here is some of my selection. The middle two are both Paul Smith, the top one is of unknown origin and the bottom one is some of Ikea's lovely linen that Joanne kindly purchased for me - there's nothing quite like agreeing to a pregnant lady's offer to haul fabrics across London for you to make you feel like a bad person. 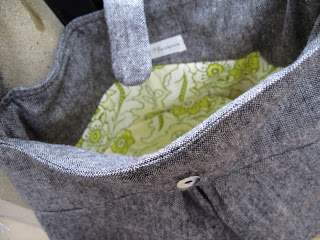 A hand bag requires a different sort of everything to a shoulder bag. It requires a handle that is comfy on the palm, a stockiness that means it doesn't lollop around one's ankles as you walk and a fastening that sandwiches together the sides in case of inclement weather (for with a shoulder bag your arm acts most efficiently on this front). So on this occasion the Melly bag that I love to make so much would be all wrong. So here it is (the photo is poor - a very rainy day last week). 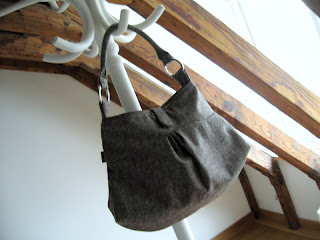 The shiny hardware is, as ever, from my favourite bag supplies lady. I also ordered some plastic tubing to go inside the handle (photo of handle at top of post). I worried that the ends might wear at the fabric and so sewed the tube flat at each end before inserting it (if you are thinking of doing this it's not at all stressful and my sewing machine sewed through two layers of the thick plastic tubing without any problem, because while it's thick, it is very squashy). I found constructing the handle tricksy, partly because I'd never made that type before...my mistake was to attempt to stick to using my machine, in the end I realised that the only way to get the finish that I wanted was to sew the majority of it by hand. I'm sure that I've mentioned and linked to this before, but once again I was so grateful for the tutorial on ladder stitching by Orange Flower. Where a traditional whip stitch would have been technically suitable, aesthetically it would have been an eyesore. Thankfully a ladder stitch is almost completely invisible and so perfect for this kind of handfinishing...it troubles me to think of all the projects that would look utterly ugly in parts had I never come across this method. It's one of those things that within the realm of sewing is quite life changing! Yes, I am such a creature of understatement and reserve, I know. 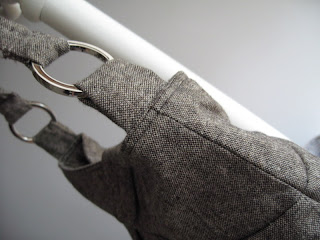 Anyway, this week I have made a cravat, a bag and a bed tidy...as random as the items in a game of My Grandmother went to Market...but somehow it doesn't feel like I've been sewing at all. On Monday I found myself going on an impromptu trip with a lovely friend to previously unvisited garden nurseries where we managed to fill her entire car with eleven Laurels, some clematis and a 7ft Golden Bamboo. The next day she returned to help me dig...we dug nearly all day and ate fondant fancies from Marks and Spencers in between shovels loads. On Wednesday I painted the garage door a sagey green. On Thursday I ate one green leaf (that bit's not strictly true) and wrote a blog post. Ahh, the sun has come out and it feels like I'm on holiday this week. Enjoy the sunshine. x
Email Post