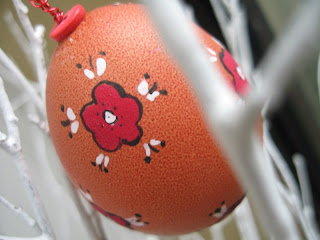 Easter weekend found the Teacake household a hive of activity and mess. While the little Teacakes and I blew eggs, dyed them (somewhat unsuccessfully - how much food colouring must one use to achieve even the softest pink glow?! - I remember the ones that I made with my own mother as a child being almost maroon!) and then painted them at the dining table, Mr Teacakes took over the breakfast bar constructing a contraption needed for a competition at work on Tuesday - namely who can throw an egg from a 3rd floor window and get it to reach the ground without it breaking. An elaborate contraption using cardboard, a cats cradle of shock-absorbing elastic bands and a parachute has been made and repeatedly flown down from our bathroom window to whoops of delight as we discover that yet again the egg has remained intact...we began to wonder whether the egg was faulty, with a strangely unbreakable outer shell. 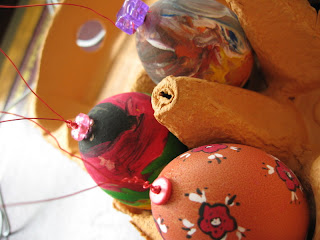 So here are our eggs. We visited Grandmama's house for tea on Sunday and hung them on her Easter Tree. 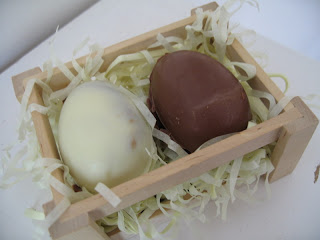 Other things causing mess and mayhem was the hand-making of chocolate Easter eggs. Somewhat selfishly I chose to save this activity until after the small ones had gone to bed as I knew that, never having done them before, but always having wanted to, I would want to be control-freaky about the finished result and didn't want to inflict my pained grimaces and helpful suggestions upon the children as they tried to get on with the joyful business of whooshing chocolate across the room. But really, I should have been more relaxed and let them in on the fun as they were, for me at least, impossibly difficult to get right and resembled a child-like creation in the end anyway. Three layers of chocolate must be built up and allowed to dry in the moulds to make the shells thick enough to remain whole when taken from their plastic nests...it was only after making and then breaking six eggs that I discovered that the final act of separating them from their moulds could be completely painless if they were left in the fridge to harden for a good couple of hours, rather than an impatient 15 minutes...but no matter, for one must eat what cannot be salvaged. 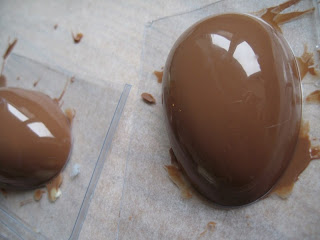 I began to feel rather professional when I attempted mixing white and brown chocolates to give a swirly outer shell...but the wonkyness of the edges, the rocky terrain of the interiors and the inability of the two halves to be stuck together hints at the fact that a true chocolatier had not had a hand in their making. 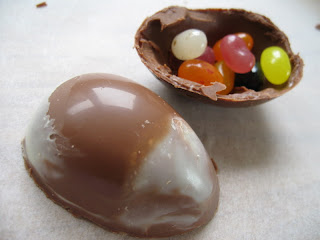 This was Mr Teacake's Easter Egg - we have become somewhat obsessed with Jelly Beans since realising that they don't actually contain gelatine as we had previously assumed.
I hope that you all had lovely restful long weekends and that the Easter Bunny gave generously. x
Email Post