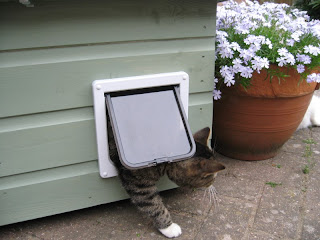 Well, the pause from sewing is only in the form of this blog post actually, as my machine has barely been turned off as I have been busy designing a new bag, but I suddenly felt more like doing a cat report than anything else. When we got our lovely cats in January I knew that we were primarily getting them for the little Teacakes and that there would be many sacrifices on my part...the copious hairs, closed sewing room door and hours of extra housework I have got used to...but the one thing I couldn't get used to was coming downstairs to find mice and other creatures racing around the kitchen when I was least expecting them. I tried to think positively and view them as the thoughtfully caught catty gifts that I knew they were, but I'm just not that good around nature and so in the end I avoided going downstairs during the day as I was too terrified by what I might find. I also began to obsessively remove any potential creature hiding places...the recycling trug was removed, my plastic bag carrier was hung elsewhere, the coat rack was re-homed, stationary pots were thrown out in favour of tins with lids on and the children's lunchboxes were carefully hung up to air upside down each night...I was turning into a mad woman. 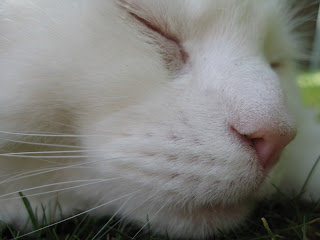 And then one day Joanne said to me that she didn't think the cats would mind if I just closed the cat flap for a couple of hours to give myself a respite each day when I knew I wasn't going to be faced with rodenty surprises. And suddenly I felt very much better because, with this suggestion in mind, the cats and I struck a deal (I talked, they listened and then blinked at me in that way that is meant to communicate that they love you and I also took to me that they recognise that I am neurotic and are accepting of this). The deal is this: they can get out through the cat flap whenever they want, but re-entry is only permitted once I've seen that they are not secreting extra house guests about their persons. I check regularly to see if they want to come back in and I was so happy because this system was working wonderfully and the cats seemed completely happy. But then a couple of days after this new arrangement began, it started to rain while I had popped out to the shops. I came home to find soggy cats sheltering under the garden furniture and felt utterly distraught that my plan was so fundamentally flawed and that the poor cats must have felt so unloved. 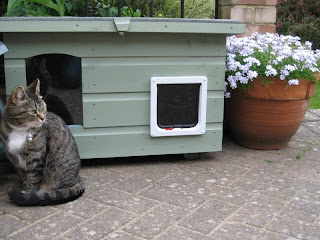 So imagine my delight when I dreamt up the idea of a cat house for those times when I'm not there to let them in...and then my even greater delight when I discovered that this was not an original idea and that there were already whole companies in existence dedicated to creating lovely cat houses. And even better, one that would agree to paint their usually brown cat house a nice shade of willow green before they posted it off to me. It even has a window that Bella & Honey can peep through, space for a water bowl and some bedding and a general feel of home from home when the need arises. And best of all a properly felted roof, so that they never need to get wet again. 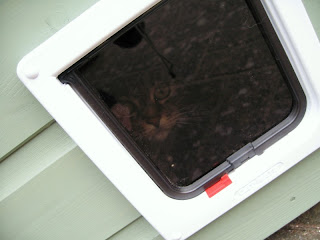 Above is a picture of Honey peeping out through the cat flap. 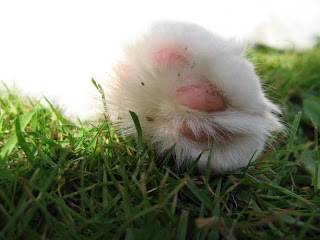 I finally feel that the cats aren't just here for the smaller Teacakes and it actually makes my heart do somersaults when I call for Bella and she bounds excitedly back from several gardens away, leaping over flowerbeds, and then making a lovely little chirruping noise when she performs an emergency stop next to my legs. In the same way that one does with a newborn baby, so much time can be lost just watching cats and admiring their lovely features. These photos were taken last Sunday when I was meant to be getting everything ready for the start of the week, but found that it was actually far more fun to laze on the grass with Mrs Belushi. 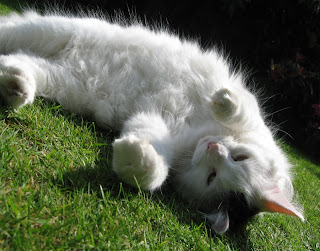 Which given that, following a lovely day of fabric and shoes shopping, I had been up until 2am chatting to Helen & Lisa the night before (Joanne should have been there too, but she left early due to a more pressing prior engagement with a pregnancy-related pillow and a bottle of Gaviscon) was just what was needed. Ahhh. Cats.

PS. At the risk of reducing my odds of winning horribly, my lovely friend Charlotte is having a giveaway here. x
Email Post