Stitchery from the small ones 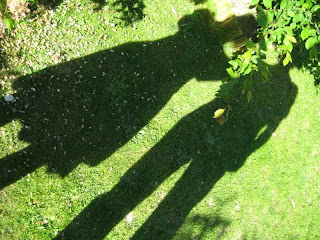 A couple of weekends ago I was photographing the roses when Mr Teacakes came and stood beside me. Before I could turn to look at him properly I caught a glimpse of our shadows on the lawn and let out a delighted squeal, for in my somewhat wild imagination, we temporarily looked like a Rob Ryan picture (to Mr Teacakes we looked like two silhouettes of ourselves...and I can see how that might seem to be so to one less prone to flights of fancy!) I had a split second to take this photo before he began to un-rob-ryan us and I was left staring at him using the deep shadow pool to make animal silhouettes. 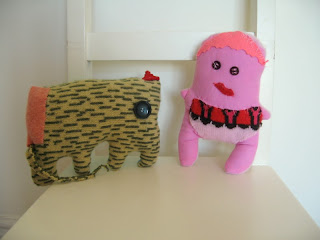 Anyway, with making your own fun in mind, I have meant to blog about these monster kits since my sister bought them for the little Teacakes at Christmas time. I am not often fond of kits, as they often feel too prescriptive, a 'craft' that lacks the opportunity for creativity and can lead to the small one feeling frustrated when it inevitably doesn't resemble quite what it says that it might on the box. However, these monster kits are something quite different and the antithesis of all that is bad about craft kits. 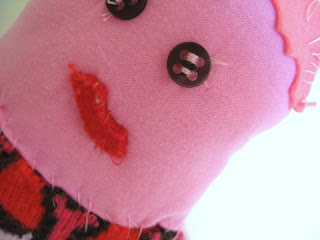 Inside the bag are a random and rather jaunty collection of fabric shapes and you are invited to use them to fashion your own monster. This is right in so many ways - for by its very definition, a monster is a creature of the imagination that can look any way you might conjure it to be, and so they were able to set about positioning their fabrics with gusto, actively eschewing two symmetrically placed eyes or a properly placed jumper. Fabric shapes were traded, possible combinations giggled over and finally, fantastical one-eyed, underpant wearing monsters were created. Dinosaur-boy's monster reminds me of an elephant, while Zebra-girl's has just enough of a feel of 'human' about it to make it even more ghoulish.

Best of all, I found no need to sit on my own hands or superglue my own lips together to prevent myself from making 'helpful suggestions' - I could relax into the realisation that these monsters did not have to resemble anything on the packet for me to feel that our sewing session had been successful. Dinosaur-boy was four when we made these and stayed immersed in their creation for nearly two hours, his mouth pursed in concentration as he formed each lovely stitch.

I suppose these kits could be stuck together with glue...but that would feel all wrong when there's the opportunity for some hand-sewing. And I can see that there could be an argument for making them from my own stash of left-over fabrics...but somehow this was nicer...I know that if I made the kits myself then I would cut pieces with a purpose for them in mind and feel anxious when I saw the carefully shaped underpants that I had cut out being used a hat. It's hard being a control freak. 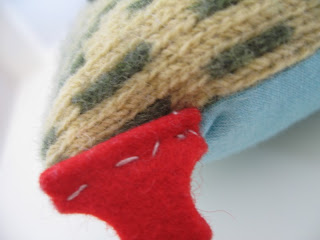 This week I seem to have sewed at a snail's pace and am staggered at my own lack of productivity - how did it take two whole days to make six pencil rolls? I think it may be the distractingly lovely presence of Mr Teacakes working in the same room in between hospital appointments. SQUEAMISH READERS: PLEASE STOP HERE. One of Mr Teacake's games of football ended in disaster last week when he collided with the goal keeper as he went to shoot and broke his finger. His appointment with the hand specialist this week confirmed that he has broken his knuckle and finger very badly and will need an operation to have metal pins put in it, in the hope that he will recover the use of it. This is no small thing for him when his job designing websites relies on him being able to click a mouse all day and his guitar requires that he is in possession of all his fingers.

He is also distraught that this will mean he can't play football for the time being. I have implored him to wear a padded foam bodysuit and crash helmet once he returns to the pitch, but oddly, he does not seem keen on this idea. Instead he just speaks of me fashioning him some kind of attractive fabric finger support. I have no wish to branch out into the realm of personal injury sewing though, so will continue with my pencil holders and buy him a consolation ice cream instead.