Cosy cushions for a rainy day 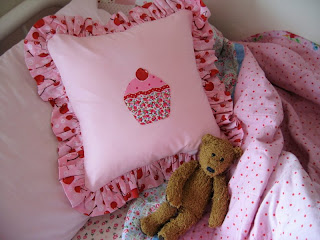 I had other things that I was planning to show you today...but they were yellow and sunshiney things, and today the weather is rainy and glum and so somehow posting such summery happiness seems all wrong. So instead, out of order (for I have a massive backlog of things to post about), I will show you this cushion that I've just finished which seems much more representative of the blustery weather: cosy and snugly. 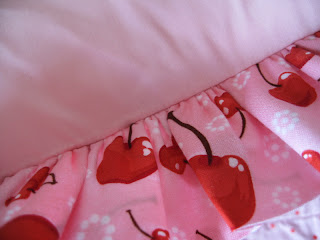 I have been feeling desperate to make some ruffles recently. What only months ago seemed like 1980s hideousness, has somehow infiltrated my thoughts becoming destigmatised by frequent bouts of unexpected thought-exposure-therapy and eventually worked to make itself seem so delicious that a point was reached where I simply couldn't do anything useful until I have given in and satisfied my need to make some cushiony ruffleyness. Sometimes the wish to sew a particular thing can be just as powerful as in an insatiable desire to eat Guyllian chocolates. 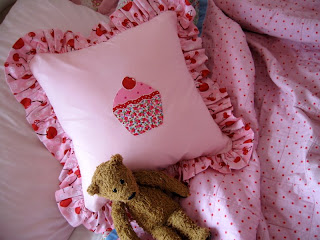 So here it is: part gift for Zebra-girl, part shameless self-gifting for me. Sometimes it's even more fun to make the gift than it is to give it.
I'm now adding a ruffler foot to my list of coveted things...ruffling by hand takes time and can be fiddly...but not so fiddly that I feel like I'm entirely rid of my ruffling bug. Next time I'd like to make one for a bigger cushion pad to make it a little less fussy, for one doesn't want to be all ruffle and no cushion. 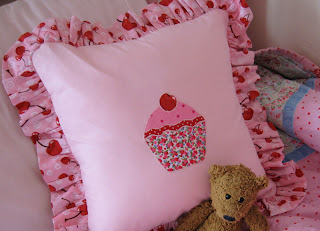 Thank you so much, lovely blog readers, for your restorative comments on my hedgehog crisis last week - you said so much to cheer me and your suggestions for de-ratting the hedgehog were so wonderful that, with a little cheerleading from the lovely Siobhan (whose comment made me laugh and smile), I don't think I am quite ready to give up on my quest for hedgehoggy perfection...or just hedgehoggy goodness as I'm aware that I may have to set my bar low in this area. So you may see more spikey snuffling here before long, but now I am off to do some much needed tidying up before the Teacakes return from school.
x
Email Post