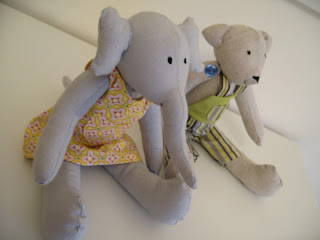 Meet Elephant & Bear. After my recent hedgehog crisis (where kind commenters where left talking me down from the parapet, such was the scale of the disaster, and my sister has since insisted on adopting some hoggy goodness, or should that be hoggy badness?), I am more than a little delighted by having sewn something that I think might actually resemble the intended creatures in my head. 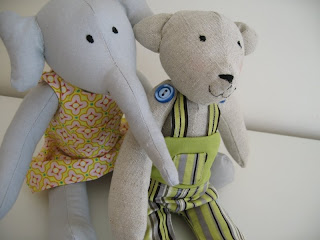 They have been made to go in the little Teacake's holiday bags (bags of treats opened an hour into the long journey). Each one has a little pocket on the bib of their clothing, which I'm hoping might eventually double as a receptacle for milk teeth to be left out for the tooth fairy, for while Zebra-girl has a cloth mouse from France for this purpose, Dinosaur-boy has, thus far, had to make do with leaving his on his shelf for collection, which doesn't seem quite right at all. 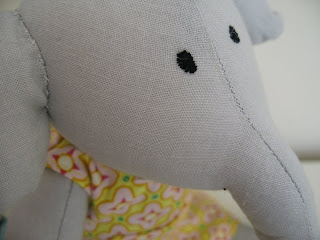 They both have bendy, pose-able arms and legs - I found some illustrations in one of the Tilda books that show how this can be achieved with yarn and buttons and was amazed by the simplicity of the technique and have had to restrain myself from spending hour upon hour whizzing the arms round and round just for the sheer fun of it. 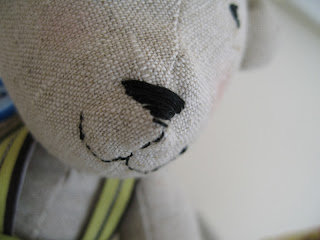 After studying how some of the Teacakes own shop-bought bears were made up and looking in books, I felt as though I'd had a small breakthrough with the comprehension of softie construction...bits of the 3D magic suddenly started to click a little more for me and by the time I'd finished the bear, drawing up the pattern for the elephant felt weirdly intuitive. So perhaps it's just small snuffly things that are my stumbling block.

But anyway, the time has finally come for the animals to be packed into their bags and for me to turn off my sewing machine and computer (the latter thrills me more than the former...I did wonder about taking it with me) for a week. I am feeling so in need of a break, for despite the fact that I feel head-spinningly in love with what I spend my time doing, I am now utterly shattered. The last two weeks I have been operating on the extended working hours of going to bed at 2am and rising to sew again at 6am, so that I could write my bag pattern and get all my custom orders made up and posted off before our holiday. Not because I have any impatient customers, but because it makes me feel anxious not to have everything done and all the loose ends tied up properly, in the same way that it would to leave the house untidy when we go away. 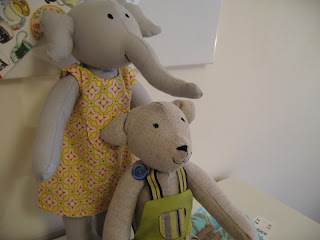 One final thing before the creatures and I depart though: Thank you so much for the overwhelmingly enthusiastic response to the Tabitha Bag PDF and to all those that have bought a copy (I am so bowled over by how many of you want to make one - I can't wait to see some of them). For anyone wishing to buy a copy, you are still very welcome to, but if it is purchased after 5pm GMT on Friday 24th July, then the PDF won't be emailed to you until 3rd August.

Additionally, to those that have already bought a copy, you may remember that I said in my accompanying email to the PDF that extra photos were available for nearly every stage should you struggle with any part of bag construction - you are really welcome to email me, should you need to, and I will get back to you as speedily as I possibly can at some point after the 3rd August.

Wishing you all a sunshiny, happy week,
Florence x

P.S. And whooopeeee! As I've been spell-checking this blog post I have just received my first email from someone with with her very own handmade, brand new Tabitha Bag who says that she is delighted with her bag and really liked the pattern - I can't tell you quite how happy this makes me! The newbie pattern writer in me has had to exercise massive amounts of self-restraint not to take to the sofa and leap up and down doing my best impression of Tom Cruise jumping on Oprah's chaise declaring his love for Katie Holmes. Down on the carpet once again, the other thing that I will pass on is that this particular lovely bag-maker said that compared to other bag patterns she has followed, she found the order that I chose to do things in unexpected, but went with the flow anyway, and by the end completely 'got' why it made sense to do them like that for this bag. As someone who's never followed a bag pattern herself, I've never been aware that my order might differ to convention, but to those that do notice this, I hope that you will bear with it, as it seems to work out well in the end.