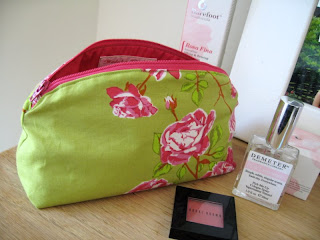 Making me happy at the moment is this makeup bag that I made a couple of months ago in a fit of self-gifting. Knowing that it was for myself liberated my stitches and allowed me to cut corners in a way that I can never bring myself to do when making things for my shop. Yes. I decided that I wouldn't change my top thread for sewing in my label...and that I wouldn't change my bobbin thread to make my top stitching around the zip blend nicely in with the lining. And all because I could. I think this is what is called Sewing Dangerously. 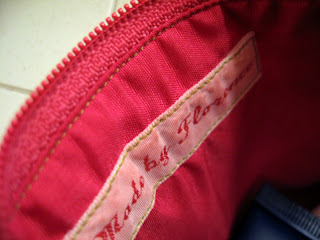 And now, oddly, this green stitching on a pink background is what gives me the most pleasure when I use my makeup bag each morning...which makes me think that contrast stitching may make an intentional appearance on more of my shop things...and also makes me think that sewing for one's self occasionally, when one's sewing is more experimental, is a virtue and not something to feel guilty about (she wrote, guiltily). 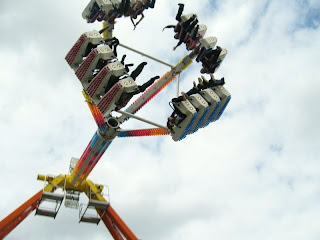 Making me less happy is the Sunday Night Feeling that I have from taking the small ones to buy new school shoes today. Oh how horribly fast the summer has been going, but what an utterly busy and wonderful August we have had - there have been parties, picnics, swimming, more meals out than I can remember and the buying of bikes for adult Teacakes, which has seen us whizzing around with Mr Teacakes shouting 'look no hands' in a moment of recaptured youth and with a nod to the Lotta books of my childhood (in which older siblings Jonas & Maria do just that)...we are discovering that there are cycle tracks and trails hiding just about everywhere and that they are all within easy reach if you don't grind your newly-fitted tow bar onto speed humps while getting to them. There have also been funfair rides of the seriously scary variety at Lambeth Country Fair in Brixton (proving that the country really is so much more fun in the city) - when I look at this picture I still can't believe that my small Zebra-girl was up their in the clouds sandwiched between her father and his good friend, Dan. The three staggered off, with the smallest recovering first, and the two men looking a handsome shade of, what I think is referred to on the Farrow & Ball colour chart as, Cooking Apple Green. There has also been the fun of realising that despite the fact that Joanne lives in London and I don't, that we are actually within Popping Distance and she popped over today for only a frivilous couple of hours and joined the Little Teacakes and I for lunch at our favourite cafe and for a dash of fabric shopping, what a wonderful mid-week treat. 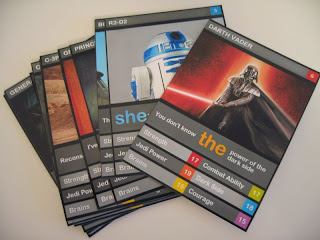 And in between all the fun we have been practising, practising, practising every day with Dinosaur-boy to try and help the jumble of letters that he sees sink into some sort of order. We have played word pairs, word snap, word memory game and a whole list of other word-related amusements and just when we were all about to cry with boredom (actually, that may have already happened) Mr Teacakes has stepped in with some of his computer wizardry and put my homely looking snippets of paper and card to shame with these wonderful Star Wars word and number cards made specially for Dinosaur-boy. 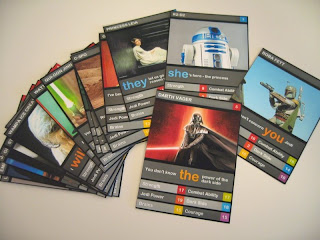 They focus on the high frequency words that crop up in nearly every sentence, but aren't necessarily easy to sound out. Each card features a Star Wars figure and beneath him or her (or it!) a quote of something they say in one of the films with the word to be learnt in bold letters. If Dinosaur-boy reads the word correctly he gets to keep the card, and if he doesn't then whoever is playing with him gets to keep the card. Once he's read through all the cards, we then use the ones that have been won to play Star Wars Top Trumps with him, which makes the whole thing feel much more game-like. Combat Ability, Jedi Power, Dark Side and other Jedi traits are rated 0 - 20, which is good for covert number practice too. Happiness is a small boy bouncing onto your bed at 6.30am who actually wants to play a word game.
Ps. I am, as ever, behind with emails. Please forgive me - I am trying to keep the computer turned off so that I can avoid being sucked into it and finding that my holiday time with the smalls has been mysteriously swallowed up. Normal borderline disorganisation will be resumed in September. Blog reading is confined to the 10 minutes in the morning when I am drying my hair, which doesn't lend itself well to commenting as my hair can only take so much multi-tasking while being tamed...but I am reading! x
Email Post