A small-sized give away... 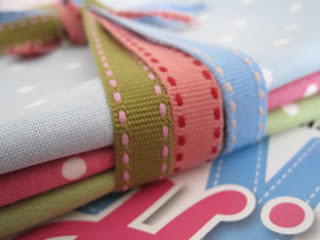 After several readers commented that they couldn't get Sew Hip magazine in their country/local newsagents/without leaving the house and having to tunnel their way through several feet of snow (delete as appropriate), I thought I might do a little giveaway of the issue that includes two of my articles (one a tutorial for a make-up bag, the other a long and geeky article on sewing machine feet) along with a little fabric goodness. 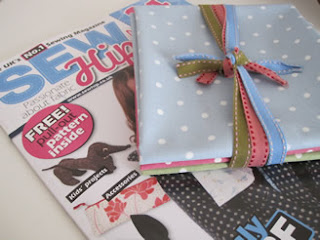 So as well as Sew Hip there are three polka-dotted Tanya Whelan fat quarters from her Grand Revival range and three half-metre long pieces of ribbon, picked for their delicious matchiness to the fabrics. I hadn't actually intended to match the little bundle to the title colours of the magazine, but regular readers will know how delighted I would have been when I noticed that I had done so inadvertently.

Last time I did a giveaway was a couple of months short of being two years ago and I asked what your favourite word was...I'm tempted to ask the same question again, as I loved reading the answers so much and because also such a list tends to be ever-changing. Last time Catherine named two of my own favourites (well, actually, they were new favourites, but on reading them my thought: was oh my goodness, how could I have not known that 'eiderdown' and 'marshmallow' were two of my most beloved words!) and for some reason it pleases me immensely to have my favourites pinned down.

However, so that I don't appear to be a complete one-trick-pony, I'm also going to ask you to tell me what your least favourite words are...those ones that make your skin crawl a little when you hear them for no apparent reason. 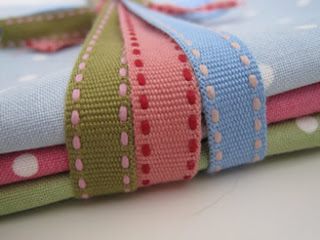 So anyway, before I go I ought to share with you my own liked and disliked words.
Favourite words: Eiderdown, Marshmallow (yes, yes, I'm a stealer), Lively (another favourite that I've adopted - this time from the little Teacakes), Bodkin, Rosy, Lemonade, Badger, Minty, Piglet, Apple, See-Saw, Cornerish, Wolf (because Dinosaur-boy says this word is the most delicious way - we often ask him to say it, just so that we can fall about oohing and aahing over it).

Lurkers are most welcome to come out of the woodshed and announce themselves (without feeling bad for lurking at all, for I lurk on many blogs myself and know that often it is just through lack of time to comment, rather than a wish to hide in the corner...although sometimes it can be that too, for everyone takes to the corner occasionally).
I'm so looking forward to hearing your words and adding to my list of favourites...and not so favourites.
x
Email Post