The quilty goodness of others 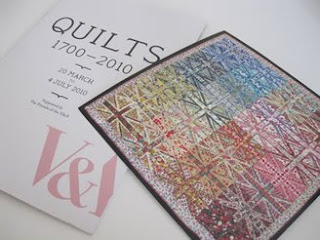 That week I'd talked about having off? I had one day of it...and then started back to work, worrying about how near the Easter holidays were...by the time that the week ended I realised that was the wrong thing to do - I had even bigger bags under my eyes and absolutely nothing to show for it except a week of half-sewn things filling the bin. To add to this, one of the Teacakes had a most traumatic week at school and Mr Teacakes broke his leg playing football (yes, he acquires broken body parts like others eat meals)...by Friday I was ready to take to my bed and howl. But as we had lovely friends visiting from London I didn't do that, but did decide that I really would take a few days off this week. So I have been going to bed by 10pm and reading Leaving the World

, which Mr Teacakes insisted upon so that we could begin our own two-person book group (I already go to one with more people...but as it's all girls this holds no interest for him...the books we will read together are decidedly more male in tone), and which I wept my way through, which did nothing to alleviate the appearance of my tired, puffy eyes, despite being a gripping and wonderful read. I then read Days of Grace

which my sister edited. Knowing that I rarely seem to make time to read now, she cherry-picks things which she's certain I will love - again, more crying...but so beautifully written around such a wonderful story that it was worth it. And then yesterday I went and met Mr Teacakes' lovely mother at the Quilting exhibition at the V&A. 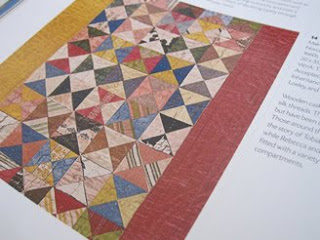 Where to start? This exhibition brought up so many thoughts that I feel they may all just tumble out of me in a jumble and not convey my feelings at all...so in an attempt at an orderly fashion, here's my low-down:

It was the most interesting and riveting exhibition...for once I actually wanted to read all those little explanation pieces that they put beside the exhibits and the quilts on show were absolutely breathtaking. Many were from the 18th and 19th century and what struck me was that I hadn't been aware of how accessible such beautiful and modern-looking fabrics had been available to quilters then. Quilters traditionally seemed to use far more silks than we do now in our quilting and I wondered how we have got to this place of using almost exclusively cottons to quilt with...it's such missed opportunity to confine ourselves to quilting-weight cottons when you see the richness that the silks and velvets bring to a piece. Obviously they also relied upon hand-quilting, and again, I felt like I wanted to race home and then make something in a completely different way and at a slower pace (yes...I appreciate that in keeping with that one should not 'race' home, but really, it was so enthusing to see the beautiful work on display). I've always felt that quilting was the one area where my sewing doesn't need to be absolutely perfect (I don't mean that my other sewing is perfect...just that I aspire to this and can drive myself to distraction trying to get things to be this way) - there's something about a quilt and the cocooning, swaddling nature of it that feels as though it should have character and care sewn into it and that if one attempts to iron out every flaw then there is a danger that something not quite so capable of conveying love and warmth might be created. It was affirming of this to see the imperfections in the intricately-pieced quilts, as though with these you could better imagine the real person who might have created the stitches that bound it together.

**Updated to say: I went straight to Flickr after writing this post and the first thing I saw was Anna Maria Horner quilting with her gorgeous voiles, as if we needed further evidence of her fabulousness...or further temptation to buy said voiles. Has anyone seen the solid voiles in the UK yet? I'm trying not to let waiting for them interfere with the living of daily life, but it's not easy.  **

The other truism that I've always harboured is that, just like making soup, I imagine that it's impossible to feel truly angry when quilting. It's odd, but I've found that both these activities seem to dissipate anger and negative thoughts (does anyone else have this?) and bring about a feeling of warm, cosy comfort. So how alarming to see that one of the 19th century quilts that was so perfectly and delicately pieced, had some angry text embroidered concerning the king using strands of hair taken from the quilter's own head - it rather turns my theory upside down...how disappointing. 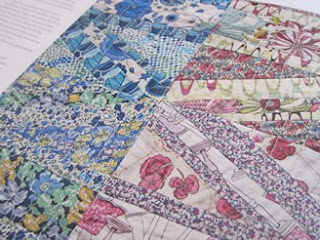 to the exhibition a couple of days ago with strict instructions not to look at it before I went. I did have a small peep with her permission, but actually I can see why she didn't want me to, as it's only after seeing the breathtaking beauty of the real thing that I had the desire to gobble up every word and appreciate fully what is being written. (Although the book is beautifully photographed the pictures don't do justice to the actual quilts and so isn't a substitute for making your way around in person).

There were several things that I found really interesting - one of which was the quilts made by injured soldiers during the war or active soldiers in an attempt to occupy oneself in ways other than gambling and drinking. These had a precision and symmetry and attention to geometric shapes that was different to the other quilts on display - they seemed entirely male, and my mother-in-law made me laugh as she noticed that one soldier had embroidered his name not just on to one corner of the quilt, but on to every panel that made up the quilt.

The other area I found interesting were the modern-day quilts that had been created by prisoners as a project commissioned by the V&A. The quilts and panels were all created in direct reference to being in prison and what that meant, and were invariably beautiful and incredibly touching in a very direct, unpretentious way...it felt both odd and also very right.

But it didn't all sit quite so wonderfully with me. Aside from the absolutely beautiful Liberty Jack shown at the top of this post, I felt that the choice of modern quilts on display was....really very odd. Tracey Emin's bed was on display, which was somewhat expected, and there were some really interesting well-executed pieces (such as quilt made up of miniscule white squares, with just the occasional miniscule photo dotted about...the blank squares represented the thousands of unnamed lost soldiers) but the other modern quilts seemed to also be 'art' or 'statement pieces', rather than examples of what the brilliant modern quilters of today are producing, such as Kaffe Fassett. Any sign of this was completely lacking and it felt like an unrounded (is that a word? I'm meaning the opposite to well-rounded and fully-formed) exhibition because of it. 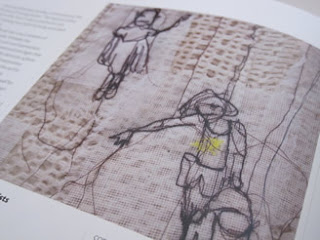 There was a foetus quilt created as a reaction to American abortion laws, plastic legs sticking out of a sewing box to represent children given up for adoption and placed in care, and figures scrawled across a quilt, their limbs conveyed by dangling threads to represent children facing poverty and hardship...all things that are worthy of a social and artistic reaction...but things that also seemed out of place within the context of the exhibition...these artistic reactions cannot be the sum total of modern quilting today and yet that's how it came across. Perhaps though, that's coming from the viewpoint of someone who had gone to the exhibition wanting solely to admire the skill of other sewer's work and to be inspired herself. I wonder how non-sewers viewed the exhibition and whether this worked for them.

Lordy, the words to pictures ratio for this post has been quite alarming - I'm so sorry to have left you with so many unadorned words to work your way through. Thank you so much for all the wonderful giveaway comments in my last post - I'm loving reading them -  you still have time to comment if you'd like the chance to win some of Rosalie Quinlan's My Grandmother's Flower Garden patchwork squares and I'll hopefully announce a winner later in the week.

For now, I'm off to make the final preparations for a small boy's Star Wars themed birthday party. Unfortunately Darth Vader will be running the entertainment from a seated position and hoping that his cast doesn't get knocked by enthusiastic party-goers...