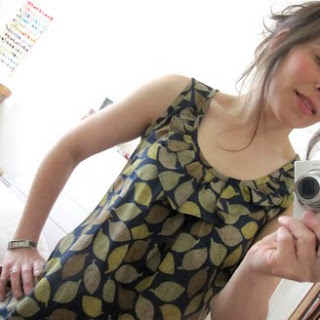 This is my first, and possibly only, entry to the Made by Rae Spring Top Week 2010 competition. I wanted to make lots of tops to enter, but somehow time has got away from me and my clothes-making ability (which is low) has meant that everything I've tried to do before this has gone wrong and I haven't been happy with the fit (there are three tops that, with a heavy heart, have been consigned to the Spring top graveyard). I have to say that my desire to give up and admit that I'm just not good at dressmaking has been strong...but stronger has been my wish to crack the clothes-making nut and become vaguely proficient - as I said to Mr Teacakes the other day, I feel like I want to immerse myself in dressmaking solidly for four or five months so that I can come out on the other side with the same sense of what may or may not work that now feels instinctive to me in other areas of sewing. 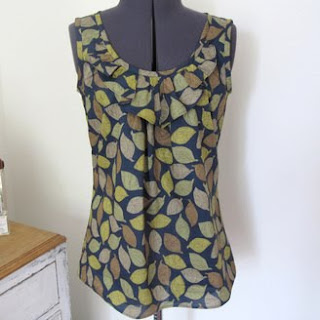 I had always thought it was fit that was most important with dressmaking, but I'm increasingly coming to realise that as well as fit, a bit part of the learning curve is choosing the right material. Last week I made a top that fitted perfectly and which had detailing on that I loved, but the print was so tiny and densely patterned that the yoke and pleats that I'd carefully created just faded away into the pattern, making the outline of the top the only noticeable thing...which was just wrong, wrong, wrong. 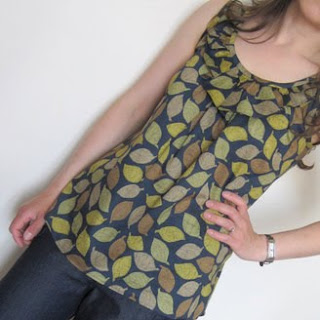 Another top I made a muslin of using an old duvet cover, which looked perfect...only when I translated it into what was to be the final top, the stiffer, starchier makeup of my chosen material made the overall fit smaller than intended and less forgiving and unsuitable for the style of material. I could go on with the other mistakes, but actually I'm realising that that's a post in itself, so for now I'll just show you the top that I'm really happy with. 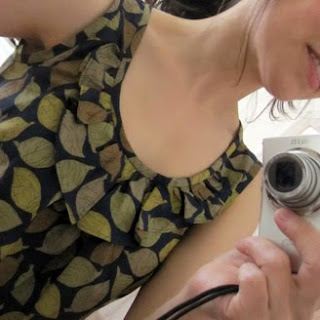 I think that this is my first successful top and it fits in exactly the way that it fitted whilst only a vision in my head (the two things rarely marry up...but it's such an amazing feeling when they finally do!). Last week I tried to make a top from New Look pattern 6895 in a material that turned out to be too starchy...however, I really loved the ruffle and so yesterday I took out the pattern and reworked it to my own measurements using my bible: Cal Patch's Design-It-Yourself Clothes

. I shortened the ruffle so that in inclement weather I can wear a cardigan without feeling like I have lots of padding going all around the neck, added a curved hem instead of one that goes straight across for a softer finish that feels more in keeping with the girlyness of the ruffle, added in light gathering at the back of the neck, took out the fastening as it slips easily over my head without one, and added in some bust darts and then made the whole thing a little smaller. 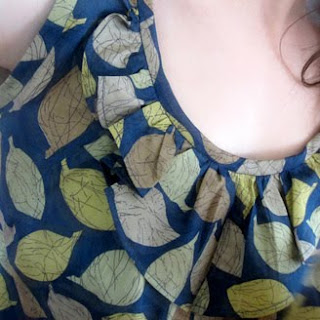 I am in love with the material which is some end of bolt Liberty lawn that I bought locally...I'd quite like a dress made from it too - something long and ankle-skimming. The combination of the dark navy and the mustard make me feel so happy - they are currently my favourite colour combination. 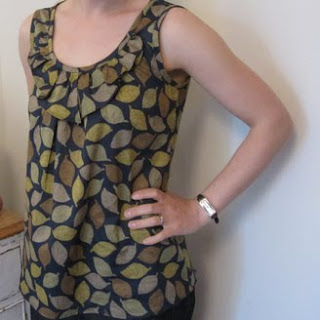 So anyway...next week the judging of Made by Rae's competition begins - each group of tops will be on Rae's site for just 24 hours, until they are taken down to make way for the next lot of entries...I wondered if you like my top...would you vote for me? (I'd be very grateful)**.  Or perhaps you 've entered yourself? I'm loving looking through all the tops in the Spring Tops Flickr pool - so much inspiration and so many lovelies - I love that this has pushed so many of us into action when otherwise I might have put off making something for another couple of weeks (and perhaps started just as Autumn was upon us).

**UPDATED: It always helps to read the instructions properly, and I've now learnt that the judges pick their favourite fifty tops and only those tops are voted on...so my top may not end up being a possiblity to vote on...however, I've already picked my own favourites which I'm hoping go through and can't wait to do some voting myself, whether my top somehow makes it through to the final round or not!
Email Post