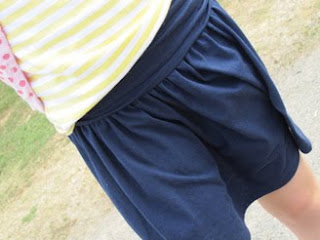 1. The first has to be that Seamstar have some of the Patty Young double knit fabrics in here...I have only heard good things about these and about how much easier they are to sew with than regular knits. I keep on putting them in and out of my online basket as this is always the way I conduct my internet shopping...I am horribly indecisive.

2. Alyson Clair has written a fantastic piece on sewing knits without a serger as a guest post over at Gertie's Blog for Better Sewing. I do have an overlocker, but I still found this completely fascinating and thought that you might too. 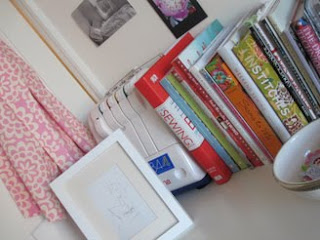 3. I have realised that I use said overlocker too much now to make it continue its life in the under stairs cupboard. It now has a permanent place in my room, where it can easily be lifted down and plugged in (yes, this is more exciting for me than it is for you...but I can't help selfishly sharing my own excitement on this one) See how it camouflages itself cleverly in between the door and the books...it's barely noticeable. 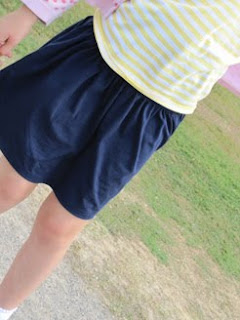 4. Patty Young has put the most amazing tutorial for this yoga skirt up on Sew, Mama, Sew - I made this skirt in less than 40 minutes on Saturday night and the fit is utterly perfect and Zebra-girl loves it. I want to make it many times over and it will be perfect for winter too...very possibly with the fabric from Point 1, once I've finished being indecisive (but at £18 per metre, one does need to give it some thought...I know that if I buy it, it's really a bit of self-gifting as I wouldn't normally spend £18 on a child's skirt). Yes, it's very similar to my own jersey skirt...but fear not, we will not be wearing them at the same time.
5. Yes, the first four exciting things are all revolving around knit fabrics...I really think this could become an obsession. And you may remember what happened when my shirring obsession struck back in June. 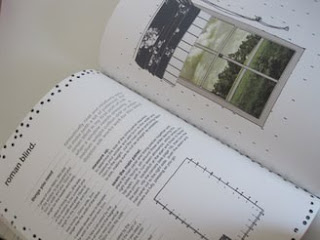 6. I have received a review copy of Lisa Stickley's book Made at Home

. It's beautiful, as with the last book that Quadrille sent me. I found it really interesting to look though this book, seeing it next to the Simple Knitting book, it's made me realise that Quadrille have a very definite identity and vision as a craft publisher - the things that had struck me as being excellent about the Simple Knitting book are very similar to those in this book. Muted, tasteful colours; un-kitchey projects; thick, creamy pages, with a good amount of space around each project. Their books seem delightfully lavish. I like that.

The book itself is perfect for a beginner sewer (probably less appealing to a more advanced sewer, but I'm not sure that's who the intended market for this book was anyway, so it's perfectly pitched). The projects are simple, but not simplistic and the way that they are illustrated is especially appealing - at times like a grown-up Lauren Child graphic. I think it was William Morris who said 'have nothing in your house that you do not know to be useful, or believe to be beautiful': well the illustrations in this book make me believe that the projects will cover both bases simultaneously. They range from a table runner to a roman blind, to cushions to foot pouffes. I was really impressed with the inclusion of curtains and blinds as this makes it feel a far more comprehensive book than many of its type. 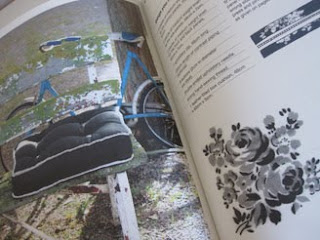 7. Mr Teacakes has the whole of this week off work - I am so excited. Today ended up taking us by surprise and turning into our very own Healthy Boot Camp sort of a day. We started off with an hour of Kundalini yoga (the first 10 minutes was spent snorting with laughter, but that interfered with the breathing techniques slightly, so we eventually stopped), then decided that it was such a nice day that we'd pack a picnic and go for a bike ride...we had just meant for it to be a slow-paced meander...but somehow it ended up being a 13-mile cycle ride in 27 degree heat. It was a circular route and half way round my chain came off. Mr Teacakes. He is the person I'd want with me in the event of any outdoor crisis. Chain fixed, it was a race through the last seven (very hilly) miles to make it back to the car in time to pick the little Teacakes up from school. We made it. 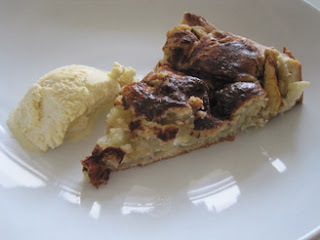 8. The virtuosity of point 7, called for the making of Dutch Apple Cake after school today which is possibly one of my favourite puddings in the entire world. I first tasted it at my sister-in-law's house a couple of months ago. The recipe was then very kindly sent to me from her best friend's mother and as it's their family recipe I don't feel as though I can share it, but believe me, it's very good and you can perhaps Google for something similar. There is a huge amount of cinnamon on the top of ours (it's not at all burnt, which may be how it looks in the photograph), as that's just the way it was when I first tasted it made by my sister-in-law's friend's mother.  Yum.

Do you have anything exciting to add to the list?