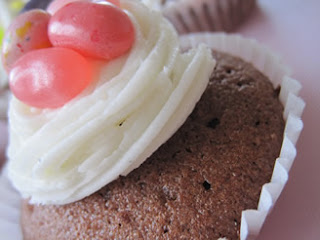 I feel strongly that one should share one's failures as well as one's triumphs...so instead of leaving you thinking that this is the sweet cake of a happy baking session shared with the Teacakes I feel that I must share with you what really happened. 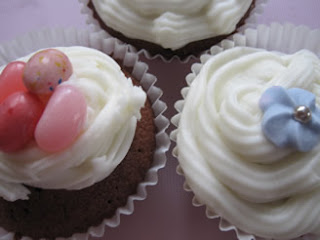 This was not meant to be a cupcake with a dollop of white cream frosting and jelly beans on top. It was meant to be a hydrangea cupcake, or a whole plateful of hydrangea cupcakes, to take along with us when we go visiting tomorrow. I thought that the person we are to see, who has always loved flowers, might be as delighted by their appearance as I was.

But it was not to be. The troubles started when we were making the chocolate cake mixture. When I plunged the hand-held mixer into the mixing bowl and pressed the power button, I somehow forgot to hold onto the bowl and immediately the mixing bowl spun wildly about the whisk, before ricocheting across the room and splattering the ceiling, walls, photo frames, carpets, doors, and even Zebra-girl's armpits (she'd raised her arms up in horror as the mixing bowl had started to fly) with brown cake mixture. Deep breath. Clean up operation completed, armpits de-caked, and education given about why it isn't suitable behaviour to lick one's sister's armpits, what was left of the cake mixture went into the oven and I began to make the cream cheese frosting. 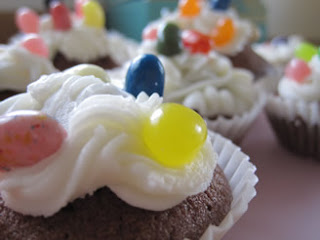 Ingredients waiting to be mixed, I firmly held on to the bowl (I was wise the second time) and then pressed the power button...seconds later my beloved hand-held mixer blew up...just one loud bang and it was gone. I have loved this mixer - it will whisk meringues, blend soups and chop nuts....it is my cooking companion several times a week and makes me happy whenever I get it out from the cupboard and plug it in. Its brushed stainless-steel body feels heavy and reassuringly good quality. Its presence has opened up whole new culinary avenues for exploration that weren't available to me before owning it. Another deep breath. Feelings about the defunct blender put firmly to one side I turned my attention back to the ultimate goal: hydrangea cupcakes.

I decided to experiment with frosting techniques before adding any colouring. So with the super-duper device for frosting that my mother-in-law had lent to me last week, and a dozen different nozzles at my disposal I set to work. I piped, I primped, I weaved...and then I changed nozzles and wondered why no matter what I did I was only capable of producing the ugliest cupcakes I'd ever seen in my entire life. I went through every nozzle and tried every consistency of frosting...but still cupcake beauty eluded me. Thus far I have presented you with tasteful macro shots that hide the true horror of how these cakes actually look....but now here they are in all their utter ugliness (you might think these look hideous...but in real life they look a great deal worse). I feel quite fascinated by just how repellent they are: 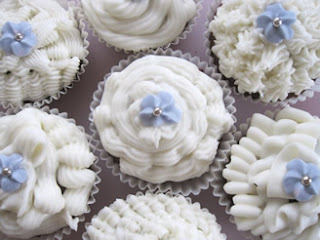 Not a single cake that looks the way I had intended. If you look at one of them more closely you can see that in fact it looks like I have recreated some strange ocean coral. When I was small I had a piece of Staghorn Coral from the Great Barrier Reef (this was 1984, before people became aware of how damaging it was to remove bits of the reef)...this one reminds me of that. I was never tempted to eat the Staghorn coral...just as I haven't been tempted to eat this cupcake. 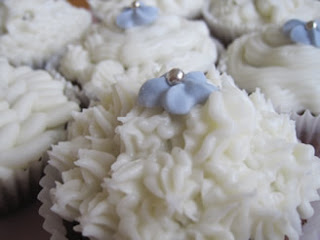 Eventually I turned the icing pump over to the Teacakes, handed them a bag of jelly beans and implored them to make something prettier than I had managed to. 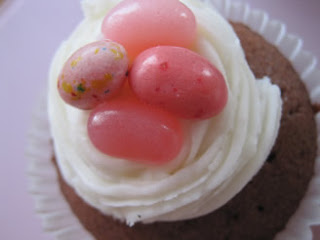 With their lovely enthusiasm and oohs and ahhs of delight at the different colours and flavours it didn't take too much effort on their part to better my attempts. Sometimes one can try too hard.

Ps. The cupcakes tasted as bad as they looked. Salvaging where one can, Mr Teacakes and I have been picking the jelly beans off and discarding the cakes this evening...I think this makes them almost healthy...sort of a diet version of what could have been.
Email Post