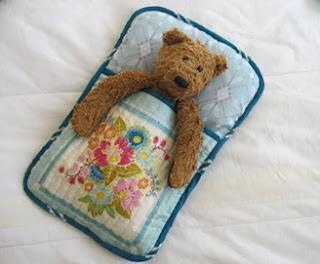 This is one of the gifts that I've made for Zebra-girl's birthday recently. Earlier in the year she decided that she wanted to get rid of a lot of her childhood toys so that she could afford to buy a laminating machine and vast amounts of stationery as well as some filing systems. The latter have yet to be implemented and the trays sit almost empty, aside from the filing done on the day of their purchase, so her bedroom still resembles that of a mad professor with piles of paper everywhere and books stacked where they no longer fit on the shelves.  With such a big part of her moving into Big Girl territory when she asked for some clothes for her bear for this year's birthday present, I decided to make a few more things to go with the new wardrobe. A long time ago I made a sleeping bag for another little girl's bear (which was temporarily borrowed by Zebra's bear for modelling purposes at that time), so I decided to rustle one up to match Zebra-girls new, yet-to-be-finished, quilt. 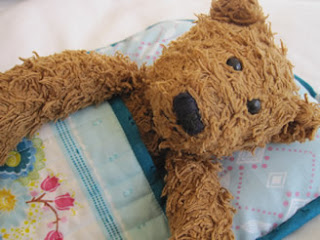 I enjoyed making the sleeping bag and seeing how the voile handles when quilted...but the fun of making this failed to tempt me into working a little faster on the quilt for Zebra-girls own bed. I now realise that there's a reason why I normally make such simply-pieced quilts and that's because I take so little enjoyment in the piecing process...it's the pinning, quilting and binding that I love. 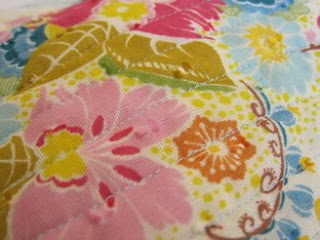 This is not a complex quilt...but I'm procrastinating over it and it's sitting on top of my fabric drawers taunting me each day: in my head it has become a giant sheet-like beast (because in its unquilted form it is really just an enormous sheet) the finishing of which stands between me and some more dressmaking and handfuls of other things.