In homage to the Audrey dress 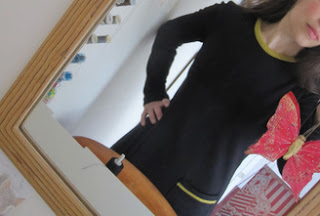 A couple of posts ago I mentioned having fallen in love with Johnnie Boden's Audrey Dress. Well, now I have my own sort-of-Audrey-dress made by me, that actually didn't end up looking very much like the original dress at all, apart from that it is a jersey dress.

Mine has full length arms to avoid chilly wrists, only one pocket to save me from looking like a school girl (it can be a problem when you find that your own school girl is only inches away from being the same height as you), a much shorter hemline and contrast binding on the pocket and at the neck. I bought this mustard knit last year on a day out with Lisa, Helen and Joanne and then promptly took it home and ruined it. It was my first real attempt at sewing with a very fine knit and I'm afraid my sewing machine ate parts of it, due to my not waiting until I'd bought some suitable needles or doing any preliminary reading around how one actually sews with knits. But a year on, it's pleasing to find that one's skills do improve with practice and this time around I wondered how I could have found it so troublesome as I used the strips of it that I'd salvaged (it was meant to have had a life as a waterfall cardigan, but actually, I think it may see even more fun as the binding on my Audrey dress). 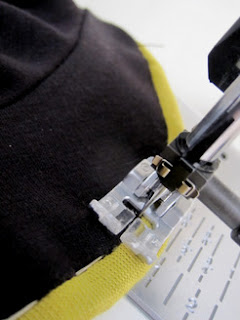 I have been coveting the black jersey for a while as it is incredibly thick and beautiful quality, so when I was out with Ian's mama last last week I finally snapped it up when I saw that it had 20% off. 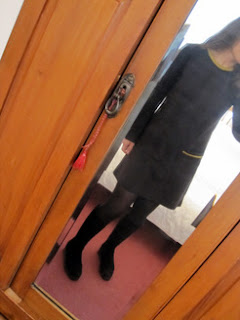 The dress, being black, has proved incredibly difficult to photograph, so here are a few blurry pictures. The mirror in the wardrobe is less than 10" wide and has odd distortions and age spots in it...but unfortunately it's the only full-length mirror in the house. I'm thinking of asking our local glaziers if they might make me a new one to go in it, as it would be so nice to get dressed without looking through the film of dust which somehow seems to be within the mirror. 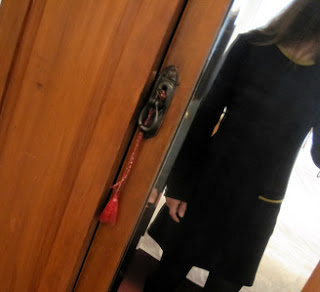 It has darts at the bust...they look as though they're in the wrong place in this photo, but I think it's because of the angle my arm is at to hold the camera, as happily I think that they look fine in reality. 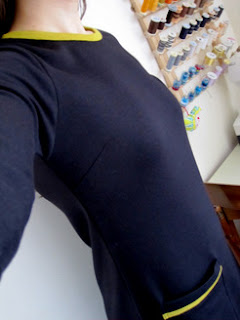 I'm actually really pleased with this dress: it feels comfortable, wearable and slips on over my head without any troublesome zips to do up. I would love to be able to write it up into a pattern (and actually several others) but I'm feeling a little stumped as to how one goes about it with such large pattern pieces - how to get them into the computer? I wonder if anyone has read any blog posts lately about how one might go about this? I have Adobe Illustrator on my computer which I (or Mr Teacakes when he eventually becomes too pained by my confusion) create my other pattern pieces in, but a whole dress feels beyond my capabilities and too much work to hand over to Mr TC, when he is so busy with other things. I've thought about the possibility of getting paper patterns printed, but then there's the problem of cost, distribution and whether the investment would pay off, as I've only ever sold PDF patterns so that feels like a big leap. Mmmm, lots of thoughts....

I'm so looking forward to the weekend: it includes extended family, babies and dinner with friends and the wearing of my new dress. All good things.