Photos from my week 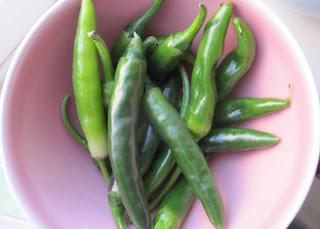 Half term week: I walked into the kitchen on Sunday morning and spotted these chillies on the windowsill - Mr Teacakes' latest harvest from his 31 home-grown chilli plants. He is not given to making aesthetically pleasing arrangements, so the moment I spotted their shiny green skins against the soft pink of the bowl, I knew that they had been wordlessly placed there especially to acquire my admiration. 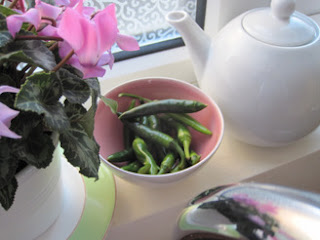 The pinks and greens made me happy each time I went to the sink that day, until they were put into the fridge to preserve the freshness that will later be used to set people's mouths on fire. 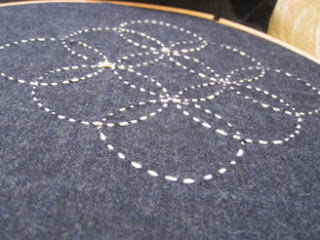 One of my small ones has been poorly for the last couple of weeks...we finally decided that rather than continuing to plough on doing lots of things and hoping that she'd get better, we would instead go into hibernation to allow for complete rest. With the heating up high, and a box-set of Herbie

films, we have spent a lot of time snuggling under blankets and generally lounging about. I have been itching to knit - such a sociable, portable, sofa-bound activity, but couldn't find any of the knitting needles or wool that I know I have squirrelled away somewhere. So I occupied my fingers with some hand-sewing, finally using the Sashiko threads that my husband bought me for my birthday several months ago. 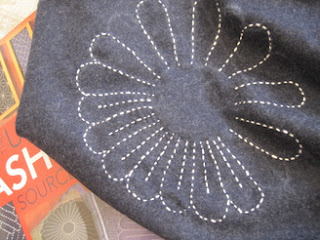 It all became easier when it finally sank in that with sashiko one moves the fabric on to the needle and not the needle through the fabric...it seems counter-intuitive, but it's amazing how much more this way of doing things regulates the stitches to become more even. However, it's somehow an activity that fails to feel completely absorbing to me...and I'm still wanting to have another attempt at knitting (this time armed with the Simple Knitting book that I reviewed back in June). 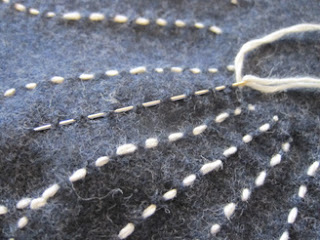 I shall be back soon, to share the sewing that I've been doing in the evenings, but for now we continue to enjoy being toasty indoors and working our way through a stack of Micheal Morpurgo books. Have you read any of his books? He writes stunning children's fiction - by far the best we've ever read - he has a huge back catalogue, but our favourites so far would be Why the Whales Came

. He writes about people, animals, tragedy and the way the world is with utter kindness and sensitivity, tackling subjects that one wouldn't immediately think it's possible to write about for a six and nine year old. When Mr Teacakes reads them aloud to us all every evening we both invariably end up blinking away tears, while the children are left pleading for just one more chapter.

I'd love any book recommendations that you might have (adults or children's) - it's such a treat to discover unfamiliar authors whose writing is so completely wonderful.