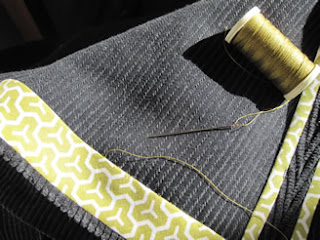 I just wanted to say thank you so much to the great many of you who took the time to share your opinions on the poll that I put up on yesterday's post about sewing patterns (it's still running, if you want to add to it) - I'm so appreciative of your help. Thank you.

I've started remaking the skirt (and hopefully next week the dress) to try and crystallise which might be a best first pattern for me to write (the summer blouse was lagging far behind, so I've put that to one side for the moment) and to try and start pinning down the pattern a little more. As you can imagine, this is a trying and awful thing to have to do as it means that I will end up with more clothes. Oh no! I have reworked the details on the skirt pattern a little - taken some things out that weren't quite working for me and added in other things that I think would be nice things to include. This photo is of the inside of the skirt (doesn't the corduroy look horrible from this side...it's really much more lovely on the outer side) - it's spending time on these details that really delights me and ones that I'd hope to include in a pattern. The skirt has bound seams and a hem faced inside with a thick band of colour: a geometric print from Joel Dewberry's Modern Meadow range - purchased from an online shop that's new to me - River Fabrics - they carry a relatively small selection of fabrics, but happily, stock colourways of the Modern Meadow range that I haven't been able to find anywhere else in the UK. Hurrah!

* In answer to a couple of suggestions with sizing that were raised in the comments section of my last post: any pattern that I wrote would be available in a range of sizes and, I'm thinking, designed for a slightly more average height than I stand at, to avoid people making a belt rather than a skirt. When I originally designed both the dress and skirt I created them with darts at the bust or the waist to accommodate my curves and to improve the fit - these darts would increase in size proportionately over the sizing range to (hopefully) continue to offer a good fit for an increasingly curvy figure. After grading (the process of drafting a pattern in different sizes), I would then make some samples up to double check. Thank you so much for raising this - it's good to have things to keep in mind as I take my first steps in designing a clothing pattern. x
Email Post