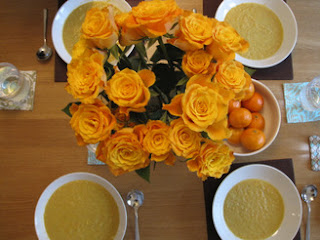 Inventing something that the world has never seen or tasted before as a way of ending 2010 isn't something that I was actively seeking to do, but this spectacular finale to the year has been thrust upon me at the 11th hour (I am of course slightly miffed that this outstanding achievement doesn't have anything to do with sewing, but one must take greatness wherever one can find it).


Yesterday I woke with a sudden desire to make a Carrot and Wensleydale soup, yet I was launched into utter shock when Google returned no exact matches for that search term and couldn't offer a single recipe for such a thing from the entire world wide interweb (the only thing even vaguely similar seems to be a red Pepper and Wensleydale soup...which is not at all what I had in mind). This made me double think my idea for a moment: if the whole world has decided that Carrot and Wensleydale soup is not a good idea, then do I really want to venture down a path that seemingly ends in culinary disaster...and at Christmas time? Happily I was nudged into soupy experimentation by thoughts of what a winning combination these two ingredients are when paired together in a Marks and Spencer's sandwich....I believe the sandwich dates back to Stuart Rose's rein....so I would like to thank him personally for the inspiration and confidence to plough on and also because I've always thought he's a bit of a hottie...which is something that I've chosen to keep to myself until now, but the man has been knighted (admittedly for his services to the retail industry rather than slaying dragons), so maybe the fact that he's a hottie is now something that's just univerally accepted. 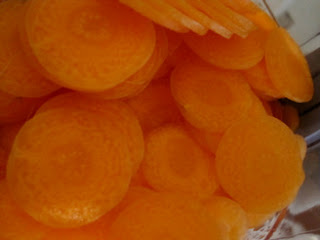 Anyway, it seems I finally have a way of thanking you for accompanying me on my sewing adventures this year: Carrot and Wensleydale soup all round. Here's the recipe - it should feed four or five people with incredibly generous portions (I'm a soup fiend and the potential to not have enough makes me feel jumpy...people with more moderate consumption rates might have some left over for another day). You will need a hand-held blender or food processor to finish this soup.

1. Chop all the vegetables and crush the garlic. (I cut the vegetables into small enough pieces to cook relatively quickly, but as you'll liquidise the soup before eating there's really no need to be too careful)
2. Place the vegetables, stock and spices into a large pan and leave to bubble away on the hob for 20 minutes with the lid on. The lid being on is important as it means that your soup won't catch on the bottom of the pan and also that all the lovely vegetable juices are retained rather than evaporated.
3. Remove from the heat.
4. Add a splash of milk...I don't like to give too many measurements...but if you're forcing me then I'd guess that I add around 250ml. Stir this in.
5. Liquidise or blend the soup until it's your favourite consistency - all the vegetables should be completely blended, but we like to stop blending ours while it's still nice and thick, before it flows off a spoon like water.
6. The Wensleydale should be chopped into the finest pieces you can manage - I'd say to crumble it in, but this could be a very risky move if you happen to let some large bits leap excitedly into the pan before you've managed to quash them - you want the cheese to blend into the soup, rather than float around on its own, so be patient and chop the cheese finely on a chopping board first.
7. Serve immediately with crusty brown bread. 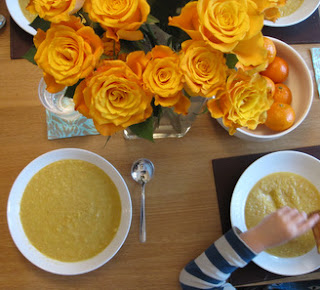 I have now made this two days running and the children love it and Mr Teacakes declares that it's the best soup he's ever tasted (which makes him sound like a creepy sycophant, but really, you have no idea how many times I have endured his slightly pained face when something doesn't meet with the approval of his highly critical taste buds...which only makes his praise now all the more delightful). 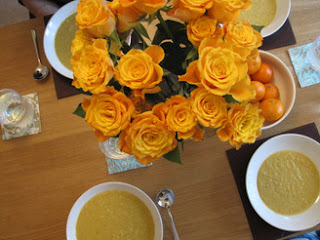 The table shots...they could have been better, more symmetrical, have had the correct amount of table mats present:  I know there was a better shot of all the orange loveliness out there, but one only likes to stand on one's chair fleetingly for fear of teaching the rest of the people at the table bad habits.

*Wensleydale is an English cheese originating in Yorkshire...I'm assuming that it has migrated around the world, not least because of its high profile in Wallace & Grommit productions, but also because of its complete perfection as a cheese. It tastes perfect with Carr's Water Biscuits...or enjoyed in solitary, cut straight from the block and hurried into a waiting mouth...but obviously, can also be sampled to great delight in soup too.
Email Post