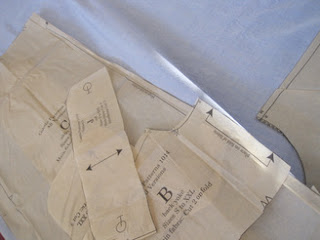 Last week it was exactly ten years since I married my lovely husband. I have always known that he was bigger than me, but it wasn't until I started cutting out the pattern pieces to make him a shirt that I realised that men, all men, are just big...a different beast entirely when it comes to dressmaking (or should that be tailoring?). When you look at the grading lines on a men's pattern, they aren't just a fraction apart, they are whole inches apart, as if man's very maleness has trickled (or stamped) its way onto the pattern and refused to be effeminised by any curves closely following one another, one size ready to be easily merged with another. Each line stands alone: certain, distinct and self-assured.


The moment I saw the Colette Patterns Negroni shirt I fell in love with it and was quite desperate to make one for my husband. I'd had it in my mind to make him a shirt to celebrate our anniversary, but unfortunately the Negroni pattern took its time arriving in England, so my start on it has been a little delayed. However, that has ended up being no bad thing, as Ian has really enjoyed seeing the shirt coming together and deciding on some of the details. There's something special about a handmade shirt.
﻿﻿Over Christmas I started researching fabric. My first thought was Anna Maria's voile, but I worried that some of the magic of the gift might have disintegrated in the wardrobe if he had to wait for four months before it was warm enough to wear it. However, Ray-Stitch have an amazing collection of apparel cottons and Rachel sent me a beautiful selection of samples to choose from.

These are some of the fabric samples that I considered, before choosing the pale blue Organic Crossweave in the second photo. It was a close call between that and the soft grey organic handloom cotton.

A man's shirt is beyond my own pattern drafting skills and I had impatiently begun to think about whether I should buy an envelope pattern when the Negroni spent so long making its way to England (the very thought now makes me want to sit in a darkened room weeping at the fun that would have passed me by) - I'm so pleased that sometimes it takes a while for me to act on a thought, because the Colette pattern has been so worth waiting for. The techniques involved in making a shirt are far more complex than many that I've tackled before using an envelope pattern, and yet they were all undertaken without the strokey beard moments that one would usually expect because the instructions and diagrams are so transparent - I am in love with how Sarai writes a pattern - it feels to be part pattern, part masterclass with an expert seamstress. Perfect. 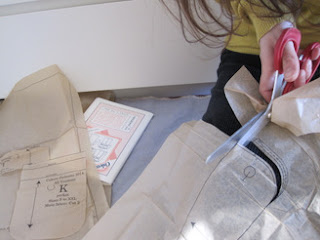 Working through the pattern has taught me so many new techniques: how to flat fell seams on both a curved and straight seam; a fiendishly clever way of putting the back facing into a shirt that I would just never have guessed at; how to make a sleeve placket, which is something that I've been longing to learn as I will be able to use this so much in the clothing patterns that I draft for myself. 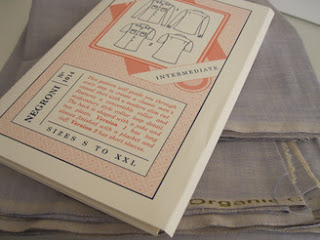 I can't wait to show you the finished shirt, but it could be a few days as during winter my husband leaves for work in the dark and arrives home cloaked in it too. I am thinking that it would be inappropriate to ask him to go in later one day for blogging purposes, no...?
Florence x
Email Post