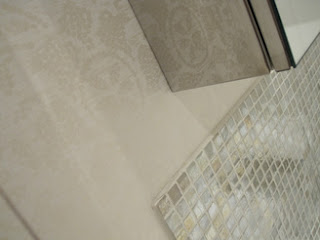 Finally, some pictures of what has stolen for my time and attention for most of January and a good part of February. Above are the tiny mosaic tiles above our new sink, against our one wall of wallpaper. The pictures don't show it very well, but although they are almost colourless, both the wallpaper and the tiles are very sparkly.


I never tire of seeing 'before and after' pictures on other people's blogs, so I thought I might share some of my own. Our bathroom used to be an odd 'L' shape and there was a small corridor to reach the bathroom, so we decided that we'd love to get rid of the pointless walkway and turn the bathroom into a nice big square.
When we moved in we replaced the loo, bath and shower and stripped the walls, because they were the only aspects of it that we could afford to tackle and they desperately needed doing. Unfortunately, the old tiles leaked and the replacement bath wasn't properly installed, which meant that we never got to use the new shower as the water that leaked from so many places threatened to damage the rooms below. By December the sink leaked, the hot water tap had stopped working and the unused shower pump beneath the bath had to be disconnected from its leaking pipes, so when the builders arrived at the beginning of January we were quite delighted to see them. 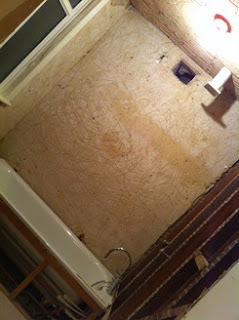 Unfortunately, once work began our bathroom looked like this for a very long time as our plumber became unwell. Bathing was primitive and came complete with bits of plaster and loft insulation floating in the water. Once the bath was removed entirely, more plumber illness followed and the children had several baths in the kitchen sink until the new bath could be plumbed in. 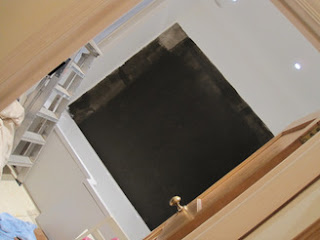 It also stumbled at this point for a long time too and I remember feeling that the new bathroom might only ever have a bath in it. The black paint is apparently known as Black Jack and stops any damp from penetrating the walls, but it made me think how much fun it would be to have a blackboard above the bath for moments of inspiration.


It took over a month to get to this point...but just like childbirth, the horror of bathroom installation seems to melt away once you have a lovely shiny new bathroom to use (or it did until I started looking over these pictures and then the horror all came flooding back to me).

And now the other side of the room:

We had open shelves that would be tidied about once a month and then get disrupted the moment we needed to find some Savlon and plasters in a hurry....but I think really the reason that our bathroom was so messy was because it was such a horrible place to spend time in that I felt uninspired to try to keep it tidy (this is unusual for me as I love tidying and cleaning). I feel most reticent to show you this picture...but it's impossible to understand why what we now have is such a great improvement without seeing how it truly was before. Brace yourself:

There was even some bathroom sewing involved in the transformation. Curtains and blinds are perhaps the things that I most loathe to make. I don't even tend to consider the making of them as sewing; sewing feels like fun, where to me, making window coverings feels like torture. However, the quote for someone else to make two Roman blinds for us came to over £500...so it felt as though venturing into uncharted Roman-blind-making-territory was a risk worth taking at the prospect of saving so much money. Our local interior designers - who are utterly wonderful - helped me pick out some fabric on the basis of my tile and wallpaper samples. For a bathroom, silk can't be used as it's a mold magnet, but I was delighted with the fabric that they found for me, which looks silky and has a sparkly iridescent quality (this somehow isn't picked up in the photos), but isn't actually silk. I'm lucky that the town I live in seems to have lots of good shops filled with helpful people, so once I'd collected my roll of material, I went straight to the curtain-makers where they were able to give me all the advice I needed about how to make a Roman blind. They sent me off feeling like I knew vaguely what to do, with the instruction that I was to ring them if I got at all stuck - it's this kind of kindness that can give you the courage to have a go at something that you feel most uncertain about doing it (the lady also told me that if it started to go wrong, then I should leave it alone and go and have a cup of tea...and that if it continued to go wrong then I should leave it until the next day entirely). I've noticed that one of my friends who is a doctor never mentions that she's a doctor when she's having a crisis with her own children, as she thinks that people are more reluctant to offer their own advice or step in and help you. So in this case I avoided saying anything that might imply that I've actually sewn nearly every day for the last four years as I didn't want them to assume that I had even the most basic level of understanding when it came to blind-making, and thankfully their advice was invaluable. 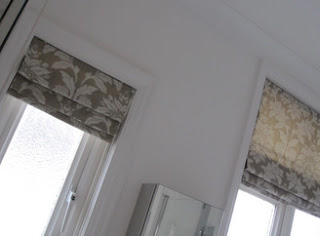 So these are my first attempt at Roman blinds - I bought a cassette that goes along the top that holds a side-winder, which means that you can hoist these blinds up and down just like you would with a roller blind, without any need for trying to keep the strings nicely balanced or winding cords around cord locks when you put them up or down. You still have to thread and make them just like you would with a standard Roman blind, but using them once made is much simpler.

The whole family's delight over the new bathroom is hard to express: three of us can now gather round the big sink for teeth-brushing; there are so many shiny mirrored surfaces the Zebra-girl has found that she can even brush her teeth looking into the light pull; we can stay in bed for longer each morning now that we can have showers instead of baths (although we haven't - we have all become so used to getting up at 6.30 to dress in time for the arrival of the builders that we've somehow continued with this); and having a shower somehow seems so much less tiring than having a bath in the morning.

I spent much of December trying to decide on wallpaper and tiles and found it so helpful when people listed what they'd used (Flickr is an excellent source of bathroom inspiration). The paint that I've listed is amazing by the way - the finish is completely chalky and matt and yet it's environmentally friendly and has a stain-resistant and washable finish ideal for bathrooms and apparently even exterior masonry.

Despite the fact that our builders were lovely, it's so nice to have the house back to myself and to be able to return to more regular sewing hours.