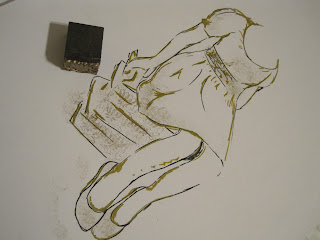 Sewing has ground to a crashing halt, as the room where I would usually sew is mostly full of dust and workmen's tools during the week...but I did get a little sewing done this weekend in the form of making some Roman blinds, which are something entirely new to me. I can't say that I was leaping up and down in anticipation of making them as it feels more like Sensible Shoes sort of sewing - utilitarian and necessary - but it was a relief to finally turn my machine back on.

With so little evidence of productivity to show you, I've scrolled through my camera card (which has over 2,000 pictures on and when I scroll through quickly it feels like re-living the last three months at high-speed) to find some past-doodling. The eagle-eyed (or just the obsessional) among you may have already recognised where I had taken inspiration from for the drawing at the head of this post. It's taken directly from the promotional material for Anna Maria Horner's Innocent Crush fabric line. Even before the line was released I'd fallen in love with it on the basis of the shot shown above. I love the way it's arranged, as well as the fabrics it features. 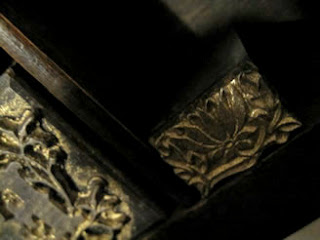 Back in December, with a new gold pen and a smudgy gold ink pad at my disposal I was looking for a subject matter to experiment with. I enjoyed doing this, as decorating the bolts of fabric also gave me a reason to use the old stamper that my sister bought for me as a gift a few years ago. My fabric girl wears rather demure ballet flats, but other than that I've tried to copy the photo faithfully. As a result my children are disturbed that the girl is headless. It's a feeling that I can relate to at the moment though, so I'm happy with that.