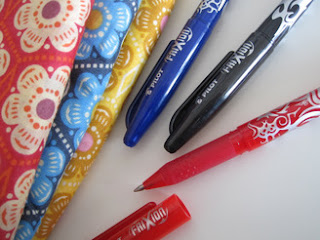 For my first March of the Tools post I wanted to talk about fabric pens. There are so many temporary fabric marking pens on the market, but I think many are fundamentally flawed. Often I've found that in reality they don't magically fade away after 24 hours as promised and at other times I've found that wetting the fabric to make the ink disappear can leave a water mark or, if I've been embroidering letters, doing this has even caused a small amount of colour run. All horrible, traumatic things. 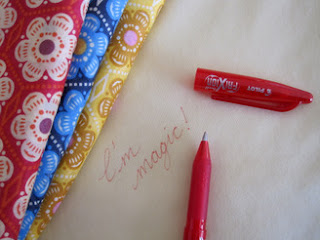 So it's been with utter delight to discover an entirely new type of pen. Frixion pens are sold individually or in packs of three colours and magically disappear the moment they come into contact with your iron, even on the coolest setting (so perfect for silk too). The disappearing act is instant. Less than one second, leaving not the slightest trace of your inky message. 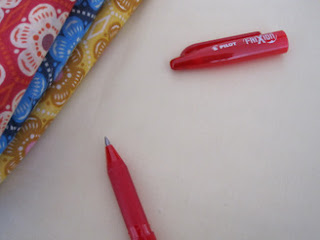 Here I've used it on one of Anna Maria Horner's palest plain voiles and there's no trace of it after touching the iron to it. 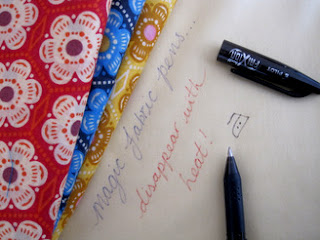 I can't recommend these wonderful pens highly enough - you can see them easily on heavily patterned fabric, they're incredibly inexpensive, and perfect for marking out embroidery designs, pattern markings and seam allowances. You can even use them on paper (where you can erase the pen with friction or heat...I don't use the friction method for fabric as I wouldn't risk doing anything that could cause the material to 'furr' or distort the fabric weaves).

The only area in which their brilliance is a little less shiny is during a project with a great many pattern markings that needs to be pressed frequently at each stage of construction. For example, I used these pens when making the Negroni shirt and pressed every seam as I went...meaning that I had to be incredibly careful not to accidentally erase the numerous markings I'd transferred denoting buttonholes. The only other downside is that they won't show up well on black or navy fabrics...but don't worry, for those fabrics I have a different tool - I'll share that with you in my next installment. In the meantime, if you want to buy yourself some Frixion goodness you can find them on Amazon here.

(The current cost is about £5.40 for three. And if you don't like those colours, then you can search for 'Frixion' to reveal greens, pinks and other lovelies).

March Tools aside: you might remember that I recently posted about the Lisette patterns for adults from the makers of Oliver + S. You can now find them on English shores at Backstitch, here.