March of the Tools: Magic for dark fabrics 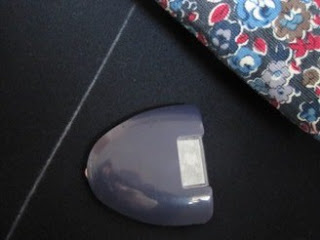 My series of March of the Tools posts continues today with yet more fabric marking options. For all other fabrics then do first try the magic pens of the last post, but for very dark fabrics, which are so often what I gravitate toward when dressmaking, I use this chalk wheel (in fact I love it so much that I sent one to prolific dressmaker, Jane, last week as a thank you for something that I'll hopefully blog about very soon). At the top there is a refillable cartridge of white powdery chalk and at the opposite end there is a wheel. To create marks on the fabric you simply run the wheel over your fabric and the crispest of white lines is left behind. 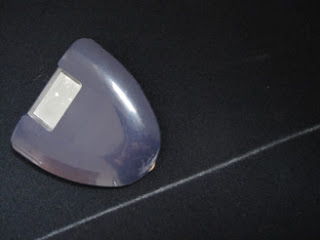 And because the chalk is so powdery it seems to rub away more reliably than some chalk pens, which I've found can be prone to snapping or produce thick, ugly lines. 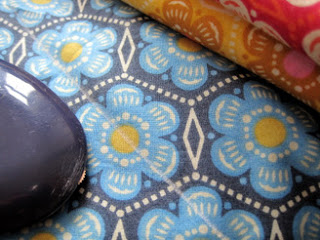 It shows up well on patterned fabrics too. The only fabric that I wouldn't use the chalk wheel on would be a very fine, gauzy fabric where I'd worry that the teeth on the wheel might damage the fabric. I buy my chalk wheels locally, but if you're interested in acquiring one of these wonderful wheels, simply type 'Prym chalk wheel' into Google and it should come up with plenty of online stockists.

I'm now off to work on something secret that I'll hopefully share with you next week (it's only a secret to be kept from the recipient, but I don't believe the person reads my blog, so I think it's safe to be indiscreet next week).

Ps. No, I have absolutely NO idea what strange thing I might have been up to that would cause this chalk wheel to have such badly scratched plastic near the ends. It's like that on both sides. I've narrowed it down to three possible causes:

a) The scratches were acquired in a fit of dressmaking rage that was so traumatic that I've had to block it out - which would explain why I can't remember this happening.
b) A feral creature has been in my desk drawer frantically scratting away to try and extract some chalk to satisfy a craving and perhaps also the desire to go for a spin on the actual wheel on the device.
c) I might have trapped it in the drawer at some point as I went to close it.