Another bed for another bear 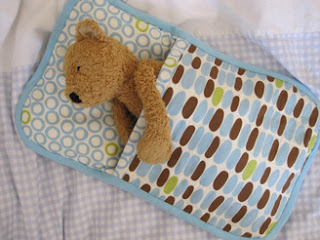 It's my not-so-little boy's birthday this week. Last week I realised that all his gifts had a theme to them: they are all plastic and they all spin in one way or another. It is a source of some delight to me that for all its mass-produced awfulness, when it comes to boys, much of the toy market is basically a yearly advance on what can be done to diversify a traditional wooden spinning top. The same fun is still being had, it's just dressed up to look a little cooler. But despite my almost-successful attempts to soothe myself with the idea that Beyblades, Battle Strikers and Ninjago are essentially just a modern spinning top, I still wanted to make him something myself. And it dawned on me that his sister's bear has a sleeping bag, two of his sister's friend's bears also have sleeping bags...but that his own bear was rather cold when he wasn't around to cuddle it at night. 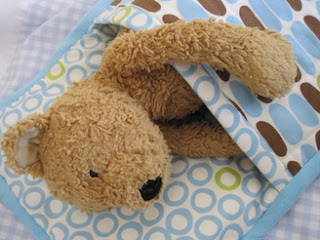 So he now has a sleeping bag of his own, in Monaluna prints to match his quilt. You might be wondering why the bear has been made to lie on his side for these photographs... 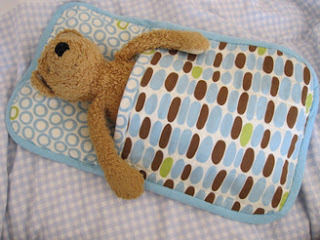 ...Bear has a tendency to look a little haughty with his nose in the air when placed on his back.