Bedsheet chic: not an effective toile

Readers, I have a problem. Those who have less inclination or sewing time may think, if pressed to think about it, that I am a reasonably prolific dressmaker, but actually I feel permanently stunted in what I would like to make. I pore over my Japanese sewing books several times a week and think through what I'd like to sew, what changes I might add in, what fabrics I might choose. I sketch dresses and tops and then draft full-size patterns for them. And then I do nothing. Because I am always so worried about wasting or ruining fabric: about not making the right choices. A sensible person would suggest that this dressmaking paralysis could be cured by making a toile.

Well, I do have an awful lot of toiles. I thought I was being incredibly thrifty by using old bedsheets as my toiles, but actually I think this may be a large part of the problem. It's so hard to tell whether you have landed on a wearable pattern when you find a strange creature staring back at you decked out in something rumpled that once covered your bed as a student fifteen years ago. It's not a look that inspires you to take out the precious lawn or voile from your stash and cut into it with confidence.

Let's focus on this most recent one. Its a toile for the above 'french-sleeved dress' from the beautiful book Simple Chic, This dress is one that I have particularly fallen in love with. But bedsheet toile made, I still have no idea whether I have a wearable dress in the offing or not. Instinct tells me that it's a little too baggy across the bust and stomach area, but almost perfect across the bottom and thighs (I have jeans on underneath in these photos which adds a little bulk in this area, but still, I think it's a good fit there)...but I can't actually be sure of this because the unaligned crumpled checks and stripes that come in from all angles obscure the view. I don't want to end up with a body-hugging dress, but equally, I don't want to make a potato sack.
So last week I bought five metres of inexpensive thin voile-weight bleached calico in the hope that it might liberate me and pave the way for more dressmaking. I think if nothing else it would undoubtedly make me feel happy if I eventually end up with a rail like this:


There's something so deliciously crisp about a calico toile that I find it almost as lovely to look at as the real thing. I love the way that in Simple Recipe they show the garments both as a toile and as a finished item (although, I'm not sure I'd recommend buying this book for a beginner as the make-up instructions aren't shown from beginning to end, but instead are placed throughout the book in non-consecutive order as a series of techniques). 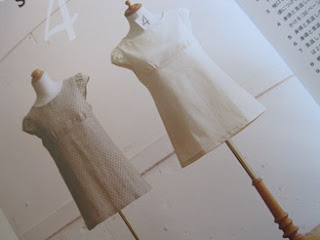 You can find Simple Chic here at M is for Make... by the way - and if you're still feeling hesitant about dipping your toe into dressmaking in another language, Kate's Japanese sew-along posts can all be found here and will tell you everything you need to know about the process.

Too busy to sew yourself (I know, not an option I usually entertain)? I did a quick Google search for a photo of toiles, before remembering that there was one on the front of Sewing Recipes. However, I happened across Susie Stone who makes bespoke women's clothing and then mislaid several happy minutes getting lost in her beautiful site. I love the ethos of her dressmaking and can only imagine that one would feel entirely wonderful wearing one of her custom-made dresses. It all looks so serene.

* The responses to my last post have really made me think - thank you. I don't think I hold quite the same stance on things now, and I'd really like to write a whole post about it, so perhaps after Easter (this post was pre-written before the holidays...that's organisation for you, no? I know, most out of character...but that's how strange a bad bout of tonsillitis can make a girl feel).
Email Post