Homage to a well-loved apron


I love putting on my apron: it feels like an active, physical signal to my brain that I am about to lose myself in the warmth of some baking or cooking. As the loop goes over my head and the ties are wrapped around my waist, I have come to realise that I feel a sense of relaxation and relief washing over me that for an hour or two I am about to immerse myself in, floury worksurfaces; sugary, vanilla scents; and then, if the children are home, requests to help; or the arrival of a small face beside me asking what I'm making; and then the satisfying feeling of there having been a beginning, middle and an end when the lid is finally pressed down on a tin full of flapjacks or a lasagne is carried over to a table of hungry mouths.

My apron ceases to just be any old apron when I have baked so many memories from the last five years into its fibres.The cotton is soft and old from being washed so frequently and it drapes with so little starchiness that often I'll find that I'm still wearing it several hours after the oven has been turned off and the cooling racks cleared away without having noticed. Its simple geometic black and white print goes with everything and makes me long for some kind of weird apron dress to come into fashion so that I can wear one over my jeans the entire time.

But there's a flipside to all of this. There's a scene in the film of Roald Dahl's 'Matilda' where Bruce Bogtrotter is made to eat a cake the size of large footstool in a school assembly as punishment for stealing a slither of the headmistress's own cake. When the headmistress asks for the cake to be brought in she tells him that 'Cooky' has baked something special for him. The school cook appears stage right with the enormous cake, as the headmistress tells Bruce that Cooky has put her 'sweat and blood into making this cake' for him and that he must eat every last crumb of it. Cooky is an intentionally repulsive character: waddling and greasy, wearing an apron so stained that when the headmistress says that she has put her sweat and blood into making the cake you know that this statement is a literal, rather than a metaphorical, one. Anyway, I had come to feel like Cooky in my beloved black and white apron. No amount of stain removers could hide the evidence of having cooked with wild, splattering abandon on so many occassions. I worried that the children would inexplicably go off their food and only reveal to me months later, wasted and thin, that the apron was just too off-putting; or that my husband would start dreading coming home to find his grubby-looking wife in the kitchen again; and even that it was no longer fit to answer the door in and that a flurry of de-aproning must be carried out as I hurtled down the hall toward the door. 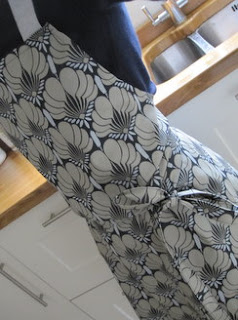 And so I have made a new one. I traced around my old one to make an identical pattern for it. It's made from Amy Butler interior decor weight cotton that I've had in my drawer for a few years and the neck loop is made from some beautifully soft webbing that I found in there too. The first time that I put it on it felt all wrong. But then I realised it was because I had been thinking too much and so tied the straps at the back, like an apron should be. However, I realised that when I don't think, I put the apron over my head and make a double fold in the fabric at the waist, before tying the straps around and fastening them at the front on my left hand side. Does anyone else do this weird fold thing at the waist? I have no idea where I've got it from or why I do it, but it somehow makes the apron feel right and perhaps brings the waist line and straps up to wear they rest most comfortably (so perhaps it's a short person thing? Maybe those with longer torsos wouldn't do this?). 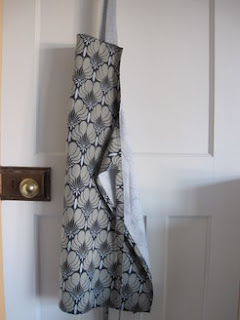 Do you have an apron attachment? Or do you have something of a multiple apron wardrobe that stops this from happening? Does the apron that you're wearing affect the mood or flavour of what you make? I'm wondering whether I would cook in an entirely different way were my apron to be bright red with vibrant flowers.