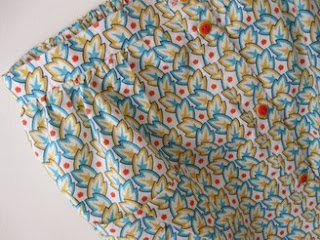 I made this skirt for my daughter a couple of months ago, but somehow never got around to taking any pictures of it at the time or since, because she's only actually worn it once. We'd both forgotten about it until this morning when we saw it in her drawer and I asked if she'd mind putting it on quickly so that I could take a photo of it. The Hopscotch Skirt pattern is from Oliver + S. Over the last few years I've seen so many things made using their patterns, so much written about them, so many pictures of the pattern sheets themselves, that I almost felt like I'd already sewn from them...but actually not, so this skirt was my first dip into the Oliver + S pattern world . The thing that is consistently noticeable with Oliver + S is that when a picture of a garment made using one of their patterns appears, it is always well-made - Liesl's instruction seems to bring out the best in anyone's sewing abilities and slap-dash is not an option. 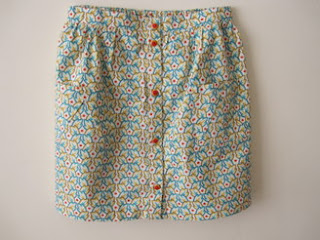 I'm happy with the skirt, but oddly it's not a garment that I enjoyed making. I found the pockets, which are cleverly based on a takeout carton, a little on the confusing side to construct and once done they didn't have enough wow factor for me to justify the laborious task of making them rather than a more simple, pleated pocket. I think this was largely because of the material I'd chosen - had the pocket been made in a contrast fabric, or the entire skirt in a plainer fabric, then perhaps they would have stood out more and felt more worthwhile. 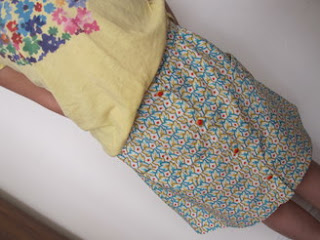 The cut veers more toward straight than a-line and I think if I'd have clocked this earlier on I would have made it a few inches shorter to give more ease of movement, even though the skirt-wearer reports that it's fine. So in some ways it feels like a skirt of what-I'd-do-differently-next-time. What I do really love about this skirt though is the fabric - again, it's been designed by Oliver + S to go with their patterns and it has a really lovely drape. It's not at all see-through, but feels thinner and more dress-weight than quilting cotton. I bought the fabric from Backstitch and the pattern from M is for make. The envelope also included a pattern for a knit top and knit dress - I haven't made either yet, but hopefully will at some point in the future.

Anyway, the postman has just delivered this foxy fabric that I'd been waiting for, so I must now begin work. He also brought other exciting things, but I'll share those with you another time. Oh, and while discussing post, I currently have something very exciting coming all the way from America and I am enjoying the UPS website that lets you track its hourly progress, so that you can almost imagine it being hauled about by the men in brown and yellow uniforms at every stage of its journey. I can't wait for it to land in England.