Notes from our weekend 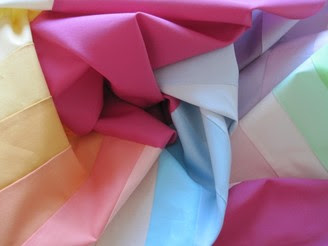 I can't reveal this fully yet as it's not for me, but I wanted to show you a little of what I've been working on over the weekend. It was one of those projects that hadn't even been in my mind on Friday morning, but by Friday evening it was well under way and involved two very late night sewing sessions so that I could get to the point of being left with only the more sociable aspect of hand finishing the binding in the garden on the deliciously hot Sunday. 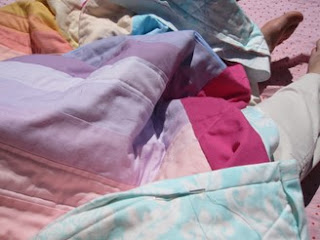 Although marginally less delicious when half your body is covered by a thick quilt in 30 degree heat, but still highly enjoyable. 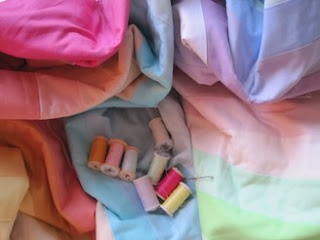 An entire rainbow isn't my normal style, but I've found it really lovely to work with, constantly exciting my eyes with all the different combinations of colour that can be seen at any one time. Quilting it in colour-appropriate threads was also fun...until I realised that despite owning well over 100 reels of thread, I don't own anything peach coloured, but I managed to work around that. 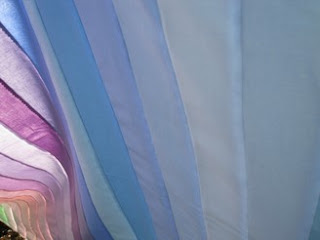 This section of blues I particularly fell in love with. Fuller pictures to follow later in the week. While I sat sweltering beneath the quilt (quilt talking with my mother-in-law, and later in the day non-quilt-talking with our friend Ben who popped over for dinner), just far enough away for myself and the quilt not to be attacked by flying wood chippings, my husband was busy taking requests for wooden creations. On previous days he has made broomsticks* and wands (there's a Harry Potter theme to this, although they don't seem to understand that he is limited to using the thin branches found in our garden and repeatedly ask: but why can't you make Hogwarts/an owl/a time turner/a spell book?). 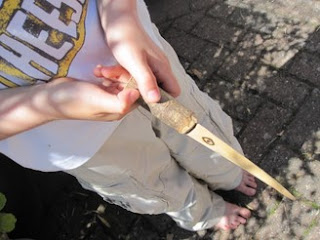 Having exhausted all the Harry Potter paraphernalia that can be made from something long and thin, he made each of the children a knife yesterday. We were all delighted to find that they are perfectly usable and they enjoyed eating apples cut up with their new knives. But even more excitingly, the children found that they could do their own wood whittling with their new knives. 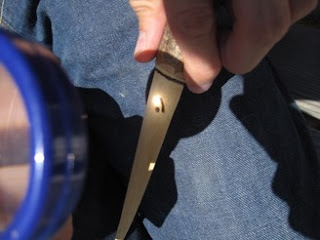 Until this year, I'd somehow missed ever seeing something being burnt by using a magnifying glass** to harness the power of the sun. But my husband spent much of his youth killing ants in this way, when there was no other fun to be had, and so is a master at it (Character redemption: he has been a vegetarian for the past 15 years, buries each and every one of the mice that our cats kill and moves errant snails from the centre of the pavement on rainy days...so please don't hold his past ant-murdering ways against him). To my non-scientifically programmed brain, these scorched drawings look like magic as they appear beneath the glass.

How was your weekend?

* A Firebolt, for those who want the full broom specification.
** Yes, this magnifying glass is indeed a state of the art plastic one pilfered from the Early Learning Centre doctor's kit...who knew they were providing tools for pyromaniacs?
Email Post