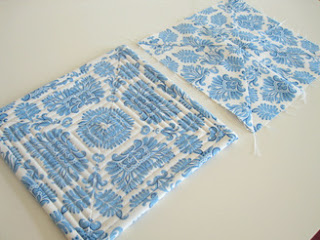 Recently me and my daughter went to stay with my sister for a weekend. You might recognise the fabric as one of the fabric swatches that was in my kitchen window sill waiting to be decided upon in this post...I'm still no closer to deciding which fabric I should have in my kitchen, but I had mentioned in that post that this fabric reminded me of my sister as she loves this shade of blue. Later that day she emailed me to say she did indeed love it the moment she saw it and was so happy to then read that I'd guessed that she would. I decided to make her a little something from it when we went visiting - I used my own drinks' coaster tutorial because my memory is so sieve-like it's quicker to go and follow my own tutorial than try to think through the steps all over again. I made it several inches bigger than the drinks' coasters though, so that she might use it as a pot stand. 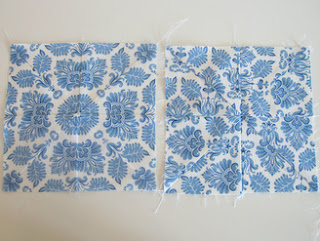 I wanted to piece the fabric, rather than just cutting it as one square, as it has such a strong directional print and I never like having something that only looks right when you stand at a certain angle in the room if it's going to be placed on a horizontal surface. However, after I'd cut the fabrics using my beloved Go! Baby cutter and then pieced them together, I realised that I had stumbled upon a flaw with the machine...it's impossible to fussy cut using it. This wouldn't bother me most of the time, but each time I looked at the block on the right I felt niggley every time I saw all the jarring angles of the print and looking at them made me feel like I was about to pass out with misery imagining that my sister might be as disturbed by them as I was. So I used the cutter to cut a half-triangle paper template (no, this isn't like using sewing scissors to cut paper with - apparently it's allowed) and then cut out each triangle individually with scissors. By the time the block on the left was pieced together I could feel my equilibrium beginning to return. And I realised that there is a reason why it is called Fussy Cutting when you take care over how a fabric is cut...it's probably because it's the preserve of fussy people. I dislike myself for minding...it's the same bit of me that wants to colour co-ordinate the baubles on the Christmas tree and do lots of other fussy, horrible things....but somehow I still do. How do you cut your fabrics? Do you always fussy cut them when you're patchworking or do you tend to vary it depending on the fabrics you're using? It's not something I've paid a huge amount of attention to in the past, but this particular fabric made me think on it for the whole time I was sewing that day. 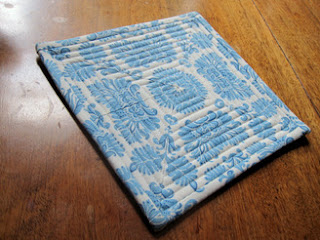 ﻿Here it is at its new home on my sister's dining room table. Like me, she loves soup: so this her official soup bowl mat.
Florence x
Email Post