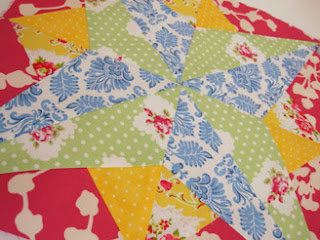 Last night at about 9pm, when I had a great many other things that I should have been doing, I decided that, with no intended purpose for it whatsoever, I absolutely had to try out a quilt block that I'd read about here on Fresh Lemons. I've tried paper piecing by hand before when I made a bathmat from hexagons, but I'd never tried piecing by sewing over the lines of a paper template. It was a completely foreign concept to me and one that I was desperate to try and the tutorial demonstrating the technique looked excellent and easy to follow (this turned out to be true - well worth sampling!). 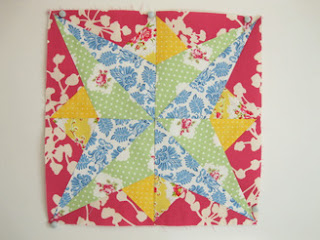 This is the result. It would have been nice not to have run out of the patterned yellow fabric half way through, forcing me to change for yellow and white polka dots for some of the shapes, but otherwise it was a happy sewing session. I'm puzzled though: do the two techniques (the hexagons used for the bathmat and the templates used for this block) have two different names or are do they both fall under the umbrella of 'paper piecing'?

The other thing that my mind kept returning to while I worked was the need to have a point for doing something. My husband was puzzled by this, saying that he doesn't try and write a song every time he picks up his guitar...sometimes he just widdles around and sings a bit because it's relaxing and because he loves doing it. However, in an attempt for this not just to be a random quilt block, but to be something that would eventually be a part of a whole, I thought about how much I'd love to make a quilt incorporating a little of every fabric I'd ever owned. It would be a fantastic reference for me as well as calling to mind different projects and memories whenever I snuggled down beneath it. In a rare name-before-quilt occurrence I settled upon calling it 'Every Fabric I have ever Owned' and was quite happy pondering this potential quilt until I realised that I may have stolen the title from Tracey Emin's controversial tent entitled 'Everyone I have ever Slept with'. By the time I'd finished the block I felt tired and as though such a quilt may be too big to fit on the sofa. 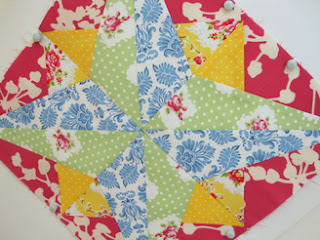 The other thing that I realised while thinking (I did recently say in one of my posts that it was best that I didn't think...you may now be wishing I didn't too from the randomness of this post) about my husband's guitar-playing analogy, was that you might like this song: it's one that my husband plays to me often...the first few times I heard it I would rarely get through it without crying. The original is by Josh Ritter, one of our absolute favourite musicians, and it's entitled 'The Curse' (click on the link to listen) - it's about a museum curator bringing an Egyptian Mummy back to New York and falling in love during nights spent together in the museum as he begins to wake. As the song progresses so too does the Mummy's strength and eventually he gets up from his glass case and takes to the streets of the city, his rags dragging behind him, photographed and celebrated wherever he goes. The curse is that whomever he falls in love with will gradually wither as he returns to life. By the penultimate verse his beloved is greying and using a cane...and the sad perfection of the song's story leaves me feeling as though I've read an entire novel and suffered all the emotions that go with it in the space of five minutes. This perhaps justifies the fact that my husband and I often seem to treat it as something that merits the same kind of dissection you might find taking place over a novel at a book group.

For me, Josh's version is good...but always a disappointment to me now as I love the way my husband plays it more. But I'm biased. As I should be.

PS. For those that fall in love with Josh as we have, we found the album that this song belongs to a disappointment. Favourite (and far more rowdy) tracks that you might want to sample on iTunes are 'To the Dogs or Whoever', and 'A Girl in the War'.
Email Post