On new things that feel odd... 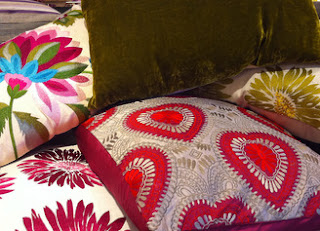 Something incredibly odd happened today. I was in John Lewis (investigating mattresses with my husband, although that wasn't the strange bit) and happened to wander through the displays of bed linen. Out of habit, I headed for the shades of white I'm normally drawn to and found myself bored at the sight of them, but strangely drawn toward the brightly-coloured duvet covers and quilts on display nearby, where I found myself butterfly-stomached at the sight of them (had my pupils been measured at this point, I'm sure they would have been as large as saucers...or possibly even dinner plates!). Mmm.That's the first bit of strange.

Later, in the cushion department (John Lewis is like that: we may have gone there to look at mattresses, but it sucks you in and casts you off in different, unintended directions, until the idea of looking at what you originally intended to look at nags at the corners of your consciousness like an irritating fly that you wish only to swat away so that you wander around trance-like in a consumeristic state of 'wantyness' for all the other things in there)....anyway, back to the cushion department. Here, I suddenly felt desperately claustrophobic at the memory of all the rooms in shades of white and cream that we have at home and I found myself completely transfixed by the beautifully plump, squashy, jewel-coloured cushions that fought for space on the shelves. I started piling up my favourites and found them so delicious that I wanted to take great armfuls of them and run from the store with them (in a non-shop-lifty way, obviously), fill the boot of my car and take them all home so that I could cover every sofa and chair in our house with them....that's the odd bit: I don't like colour in my home.

Away from the strange vortex of John Lewis' home furnishings department, which had threatened to engulf my rational self, I'm left with two thoughts: the first being that I now have some clarity about exactly which cushion colour I really love, for I really would like things to be a little more colourful; the second is an awareness of what a strangely liberating thing it would be to buy cushions from a shop instead of making them myself. I can't think of anything I could do that would feel more ridiculously self-indulgent and foreign. I'm tempted.