A Gryffindor robe for a bear 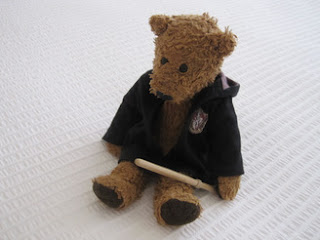 It's my daughter's birthday this week and in amongst the very grown-up items that appeared on her birthday wish list (such as books, white bed linen, and clothes from Zara), there was also a mention of a handmade Gryffindor Hogwarts robe for her bear. For those unfamiliar with this, Gryffindor is one of the house names at the Hogwarts school that features in the Harry Potter books. As a house they wear a black robe, with a purplish hood and a Gryffindor crest at the chest (you can see one here). 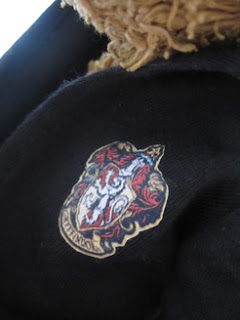 I worried over how I could be expected to make one of these when the Gryffindor crest is an essential element of the robe. But late last week I suddenly remembered the paper that I'd been sent by Photo Paper Direct the previous year (you might remember that I tried these out when I designed a tortoise, which I transferred onto a t-shirt). At that time I'd only tried out the papers that allowed you to transfer printer images onto light coloured fabrics and I have to admit that I'd remained slightly mystified by how the transfer would show up on darker fabrics, but last week, using the dark papers designed for such a thing, I tried it and was amazed at the result and how the colours show up on the black background, while the image seems to simultaneously become part of the fabric. Clever indeed. 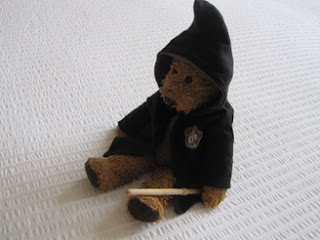 My second stumbling point was what to make the robe out of...in the end I decided to go for a stretchy jersey, even though this might be more troublesome to sew with, as I thought this may be more forgiving of my designing the pattern for Bear's robe with very little time. My drawers seemed to be the source of endless Very Useful Things for this project and I was delighted to find that the wonderful bamboo stretch knit fabric from Ray-Stitch, from which I'd made this dress and this top, was also the perfect colour for lining the hood with. 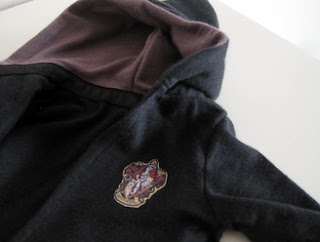 In theory making clothing for bears and dolls should be easier because of their small size, but actually it's so fiddly that it makes my fingers itch. A friend agreed and then pondered over who it is who's making the clothing for the very miniature Sylvannian Families' creatures. That was enough to make me feel as though I'd been let off very lightly. Fiddliness aside, this is one of the things that I've most enjoyed making, simply because perfecting the details that would make it resemble the real Hogwarts gowns was so much fun as I knew that my daughter would notice and be delighted with each one of them. 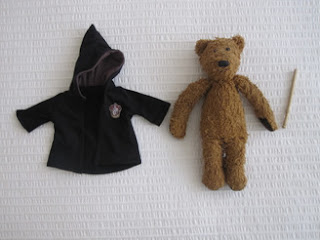 I showed it to my husband on Friday night and we decided that he should make a wand for Bear to go with it (our children and five of their friends also have their own wooden wands that he's made for them). And he did make this very sweet bear-sized wand to go with it. I forgot to ask whether he too found it more difficult to work in miniature. 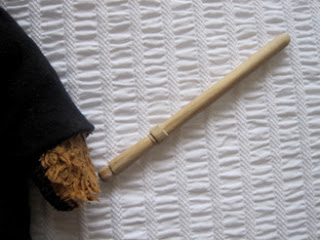 Sorry if these pictures look fuzzy and awful by the way...they're fine on my laptop, but the upload process to both here and Flickr seems to make them look a little odd.