Quilting around the cereal bowl 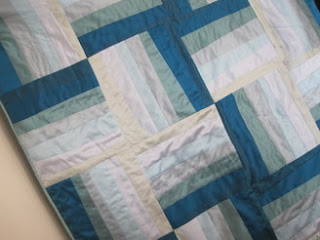 Firstly, thank you so much for all your lovely comments on my last post. We so appreciated your good leaping wishes!

Last night I finished binding the throw that uses the Robert Kaufman silk/cotton Radiance fabrics that Katy sent to me (blogged about in full here). I couldn't quite decide what to do for the quilt pattern...one anonymous reader suggested doing something clever playing with the light and dark tones which the bundle would lend itself very well to and on that basis I investigated doing a tumbling blocks quilt that appears to be almost three dimensional because of the use of tone. I've always loved these quilts, but when I thought about what would be right for our own house I knew that this would be too geometric...something more free-flowing and less defined would fit in better...and so I didn't end up doing anything clever with light and dark, but it's on my list of things I'd still like to attempt! 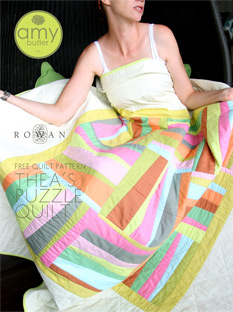 Eventually, I came across Amy Butler's free pattern called Thea's Puzzle. I liked the central panel of this and the way that the strips of colour are wonky, and are alternately placed with a thick end and a narrow end. While I didn't stick to any of Amy's dimensions, it's a fantastic pattern that lays out the cutting process quickly and simply so that you can freestyle away. In retrospect, I wish I'd cut my strips a little more wonkily to accentuate the width difference more. 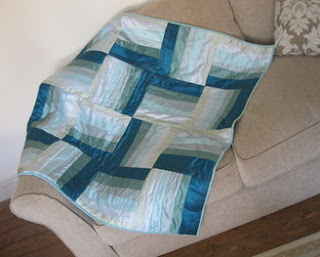 Being a silk mix this fabric is more prone to fray than cotton. I decided to try interfacing it with some ultra-soft Vilene this time (last time I used silk in a quilt I overlocked the edges). Interfacing three and a half yards of fabric was a long and tiresome process that left me nearly weeping in front of the ironing board...but it does add a little extra soft puffiness to the finished thing too, so ultimately it's worth doing. 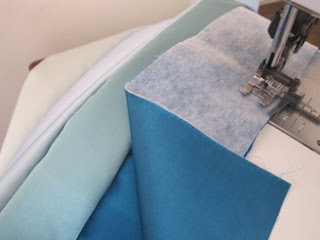 I now wonder how I've previously managed without my husband at home as my blogging assistant; today he's attempted to photograph the quilt in use (although that didn't turn out very well as he made me laugh so much that it's mostly just a quilt with my blurry hands waving around), as well as taking pictures of a winter coat that I've just finished making (more on that in another post). 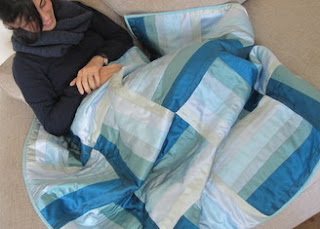 It's an odd thing having my husband at home in the best kind of way and it feels just like a holiday...only he seems to sit in front of his laptop more than he might on a holiday. Yesterday he said to me: I'll be wanting salads for lunch or I'll just end up falling asleep in the afternoon. The idea of me force-feeding him carbs was an amusing one...it was as if he knew that my lunch without him would consist of a bowl of dry cereal so that I wouldn't have to take a break from sewing. The idea of a lunch hour is a foreign concept for me and I've found myself just like I imagine a 'proper person' might be when sitting at a table with him eating spinach, beetroot, apple & grilled halloumi salads. 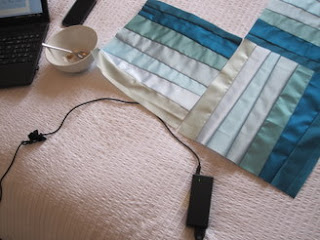 I've no idea why I took the above photo now, but it was on Monday, pre-leaping (or what I shall now think of as pre-grown-up-lunching). The quilt top is laid out in blocks before being sewn together, my laptop is on, my phone is nearby and an empty cereal bowl is in amongst it all...for some reason these things make me laugh. What do you have for lunch when you're left to your own devices?