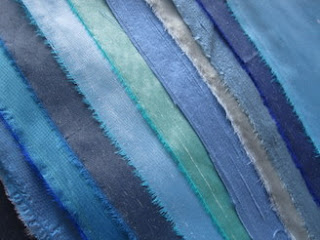 Posts were thin on the ground last week as I'm finding it difficult to fit them in around the other things that I'm doing at the moment. I rarely have unfinished projects lying around, but now, added to the coat and skirt that I talked about last week, the time scale of things means that I'm hopping between writing two patterns, a tutorial, making several Christmas presents, and learning to use Adobe Illustrator properly....so you may be seeing a lot of half-finished things appearing here over the next few weeks. 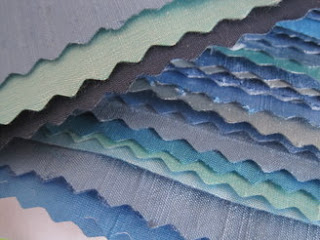 These silks are being used to make my mother a quilt for Christmas. My mother has wanted a quilt for a long time and has taken to stealing my father's in the evenings, while he sweetly freezes next to her (although she says that he is always too warm, so this isn't actually as quilt-greedy as it sounds). When I discussed the idea of making her her very own quilt we decided upon a large, blousey floral scheme that I'd spotted in a stunning quilt made by Jane Brocket, largely drawing on the collections of Kaffe Fassett, Philip Jacobs and Martha Negley. I made several attempts at narrowing down my choices, but became increasingly worried that they might not be quite right once they arrived - the prints tend to be on such a large scale that it's difficult to tell from online swatches what they may be like in reality. Eventually, I decided that I'd rather work with plain silks in varying shades of English sea - mostly brooding and dark with occasional hints of light in amongst them. My mother's always loved the sea and I knew that even though it might not be as bold a quilt, it was a safer option which felt more as though it would properly reflect 'essence of Mama' within the fabrics...and I've realised as I write that it's very similar colours to the velvet ribbon cushion that I made for her a few years ago. I bought these silks several weeks ago at the Knitting and Stitching show....without consulting my mother over this fabric u-turn...which will mean that she may find this a surprising quilt to unwrap on Christmas day. 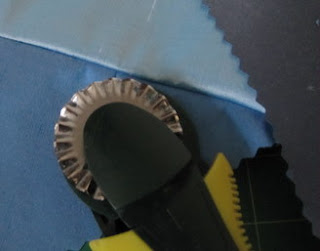 Having now worked with silk several times I felt I had more of an idea of how I could best work with the slippery eels. These are Indian silk dupioni which give a deliciously crisp rustle, which in the end I decided to retain by not pre-washing them....so it will now be a dry-clean only quilt. I interfaced every piece with ultra-soft interfacing and then bought a pinking blade for my rotary cutter so that the edges would be even less prone to fraying. Finally, I've been sewing with a 1/2" seam. 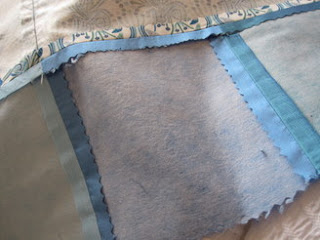 I love that I have learnt something that felt a little mind-blowing making this quilt. I've always been a pressing-the-seams-to-one-side kind of girl, but for this quilt I chose to press them open. I know that quilters tend to be split on which is the best way...but for me pressing them open was rather a revelation; I couldn't believe how much neater and more perfect everything looked and I actually thought it gave a much nicer finish from the right side too. So I have leapt over to the other side and will never press to the side again (except on especially lazy days, as I do believe that this way requires more frequent pressing).
In my next post I'll show you a little more of this quilt as the quilt top is now finished and I'm busily hand-quilting it with hand-drawn flower motifs whenever I get a spare moment....I can see that I may still be hand-quilting it on Christmas eve.

How is your own Christmas sewing going?